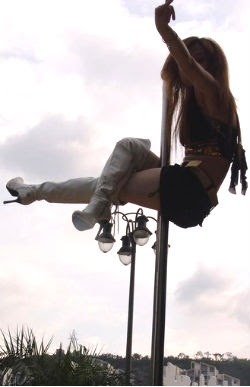 AUCKLAND is fed-up of battling a surging streetwalker population that's causing massive destruction of public property, disrupting businesses, affecting the lives of its kids, and costing taxpayers thousands of dollars—and the city is fighting back by publishing a tell-all book to rally the locals into standing up to these sex workers and taking their streets back.

The book released by the Auckland Council and the Otara-Papatoetoe local board highlights the frustrations of the people in dealing with the working girls and their struggle to ban the skin trade near schools and sports grounds.

In the dossier, Donna Lee, manager of the Hunters Corner and central business district, said she has stopped receiving complaints from business owners who had practically "given up on getting any help" from authorities and simply went about cleaning up their properties themselves, which involves picking up condoms, drugs and faeces.

"We quite literally deal with human waste every day," she said.

The call girls are also using street signs as dancing poles, leaving them bent and broken. “These are part of their soliciting equipment and they often snap them. Some of the prostitutes are big, strong people," Lee added.

According to stuff.co.nz, over 40 traffic signs, which bear legally required notices like parking restrictions, have been wrecked in the last 18 months, costing the city thousands of dollars to repair and replace.

The book also accuses one transvestite of ramming a supermarket trolley into a woman's car before lying across the bonnet of the vehicle. Another time, a school bus full of kids saw a transvestite getting naked in plain sight on the street.

One shopkeeper said between 20 and 30 prostitutes worked outside his shop some nights. They have shoplifted from his store, begged his customers for money and defecated behind his shop.

Meanwhile, local resident Bernie Taylor told Macedonian International News Agency, "We had a parcel delivered to us recently and the address was 'Hooker's Corner' and it found its way to us with no problems whatsoever."

Residents hope the information they’ve gathered will pressure the Wellington government to give Auckland Council the power to outlaw sex workers from certain areas. Locals turned out with placards to welcome the publication of the community board's report.

However, the Prostitutes Collective warned that banning popular streets would only encourage sex workers to stop carrying condoms in case they were questioned by police. Coordinator Annah Pickering told Television New Zealand, "They'll be expected to pay a fine, which they can't pay, and then they have to come back on to the streets and work to pay them off."

The book begins with a foreword from Mayor Len Brown who calls for legislative support to combat the uninhibited spread of street prostitution.

"There's no doubt that the street sex trade is enjoying its unrestricted use of public space and is possibly the only industry in New Zealand to enjoy such status. Other industries must comply with licences or special authority of some kind. The street sector of prostitution faces no such constraints," he writes.

Otara-Papatoetoe board chairman John McCracken also writes: "We are beyond moral outrage. We just ask for some reasonable control of this industry."

New Zealand has some of the most liberal prostitution laws in the world after the sex trade was decriminalised by the previous Labour government in 2003.