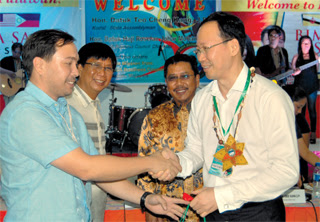 BROOKE'S POINT (Palawan): Governor Abraham Mitra declared that the province is ready for the establishment of the proposed Kudat-Palawan ro-ro (roll-on roll-off) ferry service under the BIMP-EAGA initiative.

Speaking at a welcoming dinner-cum-business matching meeting with the BIMP-EAGA Malaysia trade mission delegation hosted by the Brooke's Point Municipal Council here on Tuesday, he said the Customs, Immigration, Quarantine and Security (CIQS) Centre here had been prepared for quite some time.

He believed the establishment of the service would assist to further develop the province. Brooke's Point, located about 219km from Palawan's capital Puerto Princesa, would be the "landing point" for the proposed ferry service to and from Kudat, on the northern part of Sabah.

Mitra said in order to make the dream a possibility, it was important that the move be catalysed by the private sector.

"We cannot rely on the government all the time, we need businessmen," he said.

Hence, he welcomed the attendance of businessmen who came with Tanjung Kapor Assemblyman, Datuk Teo Chee Kang, here where they can meet up with fellow businessmen from Palawan and discuss opportunities in anticipation of the ferry service.

According to him, there are many opportunities that could be explored by Malaysian businessmen, especially from Kudat, in Palawan, which is known for its sea products, mineral and tourism.

"We are the only oil producing province in the Philippine," he said, adding that Palawan actually powered 50 per cent of the Philippines.

As far as tourism is concerned, Palawan was named one of the best destinations by the National Geographic in the 2011, while its Underground River in Sabang, on the East Coast, was also inaugurated as among the World's Seven Wonders of Nature (beating Sipadan Island).

"We in Palawan and Brooke's Point are ready for you," he said, to applause.

Teo earlier told him that the plan for the CIQS centre in Kudat was in process and he expected works to start within a few months.

"Kudat and Palawan are very close and yet we are very far," he said, referring to the journey that the delegation had to take to get to Brooke's Point.

It took them about one and a half hours from Kota Kinabalu to Clark International Airport in Luzon, from where they had to take another flight of about one hour and 15 minutes to Puerto Princesa before taking a bus ride to here, which took about five hours.

"With the service in operation, there will be more movement of people and it will be able to propel the economic development, which we must take advantage of," he said.

Teo, who is also Liberal Democratic Party (LDP) Secretary General, said they took the opportunity to push for the idea after the Prime Minister himself gave the nod for the project.

"It is hoped that this dream of ours will come true in a short matter," he said.

Others during the meeting including BIMP-EAGA Palawan Business Council President Comm Nicanor "Nick" M. Hernandez and Brooke's Point Mayor Dr Narciso Leoncio expressed gladness with the endeavour after the BIMP-EAGA's initiative seemed to have fizzled out.

Hernandez, who was in Sabah last year, recalled Tourism, Environment and Culture Minister Datuk Masidi Manjun who, when opening the BIMP-EAGA convention in Kota Kinabalu, referred BIMP-EAGA to Bring In More People Eat and Go Away.

Masidi also hoped that the members would not be members of NATO or No Action Talk Only.

"He challenged the delegates to make things happen this time," he said.

"I was touched by his enthusiasm, so convinced of his vision for a revitalised BIMP-EAGA that I there and then accepted the challenging role of Chief Executive Officer for BIMP-EAGA Business Council of Palawan.

"It is not enough, however, that our visions are connected, only in an intangible way. There has to be a physical infrastructure that will facilitate access to the elements, that will bring the visions to reality," he said.

Hernandez noted that Don Vicente Montenegro, the owner of Montenegro Shipping Lines and RORO Bus, had shared the vision and volunteered one ship MV Erlinda to provide transport services between Palawan and Kudat.

The development, he said, would help boost the economic development in Palawan and create business and trade opportunities as well as employment.

For Mayor Leoncio, the BIMP-EAGA seemed to have gone into hibernation after it was formalised about 20 years ago.

However, the convention in July 9-11 in Kota Kinabalu last year had energised the initiative, he said.

Together with Governor Mitra, the Palawan delegation to Kota Kinabalu last year had also visited Kudat.

Following the visit from the Kudat trade mission delegation, Governor Mitra later announced that a reciprocal visit would be made to Kudat sometime early March this year.

After the business-matching meeting, the delegation went to Puerto Princesa for a dialogue with the relevant CIQS agencies' representatives in Palawan as well as a forum with their business counterparts in the province.