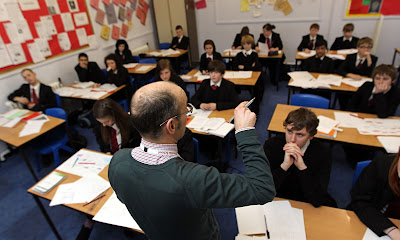 An illustrated photo....a comfort zone between Teacher and Students in the class.

After having had some valuable spending-time with the family, the school time is back again. All the preparations for schooling are already made i.e. buying uniform school, pencils, pens, book etc. Further steps cross in parents’ mind are the awareness to the general final exam i.e. UPSR, PT3, SPM and STPM for their children.

The parents are too worrying upon the performance of their children in the public school (government school). Even the students spent almost half day at school, but such performance still at lower than moderate level. Most of them obtained a lower mark in their final exam, especially for Math and English subjects that being the most vital subjects for the future preparation. The admission into any Universities is stipulated that both subjects are taken into account as the main elective to apply for any undergraduate courses. Moreover, the market job too focused on graduated students who may fluently speak well in English language.

Having a Tuition Class – this is the best solution ever for the concerned parents.

The huge number of tuition centres are grown up recently, more likely putting a reasonable price for every subject taken by the student itself that the fees range from rm50 to rm200 per lesson. This new potential business has opened the eyes of the business-enthusiasts that the class tuition would have earned some money. By hiring SPM, STPM or Diploma’s leavers as well, the Tuition Centre easily setting up.

Look back at the public school performance as well as in primary, secondary and high school, are they not enough well in the eyes of parents? The terms to apply become a Qualified Teacher even in the primary school is not easy one. The public service department (Jabatan Perkhidmatan Awam) itself put a highest strict rules to apply become a qualified one in the public school i.e. having a Diploma at least in equivalent field or having more than that will be a prior candidate than the others. The course of government for hiring a qualified teacher is respectable reason amongst the fresh graduated who searching the job. The parents would not doubtful for sending their children to the public school, that’s the higher expectation from them.

Unluckily seem, those higher expectations not shown the real teaching of life in public school. The  students are still not fully understood on what of their teachers have taught in the class especially for Math and English subjects. Some of them claim both subjects are the most boring topic in the class, moreover they claim that the attendance of such teachers actually the most irritated creatures in the earth. Hence, that was a worst time for avoiding sleepy.

However, those students who attended an extra class called as tuition class, their achievement are more better than having a regular class in the public school. They have taught by unqualified teachers in the private tuition centre but the result of teaching-performances is beyond of human expectations as well. So what the qualified teachers did? Are they meagrely teaching the students?

Lately, the sullen are always come from the mouth of 'Qualified Teacher' that they were facing a lot of problems during the teaching slot in every classes. The more stricter instruction in the classes the more pressures are come from the parents. The parents claim that the teachers are too fierce over the students during the teaching slot. On the other hand, the teachers have their own style to teach the students in order their students would benefit from the learning process in the class.

On this occasion, to strike the balance between the students, the parents and the teachers best interest is still at unresolved problem. The government need to put an extra effort by reviewing the teaching system in the school. Otherwise, the tuition centre would be established a qualified school for the public interest in the heart of parents.
Posted by sabahkini.net at 09:09