The gloomy future of Ketuanan Melayu? 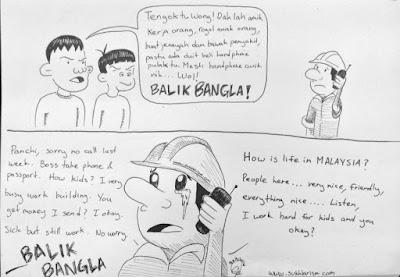 Since the Prime Minister YAB Dato’ Seri Najib Tun Hj Razak announced the arrival of 1.5 million Bangladeshi, numerous rumour has come into the people forum, even so many of them made much of graphical forms in social media.

Most of Malay people are getting afraid of their arrival just because of some bad behaviour reported lately and co-incidentally. They claimed that Bangladeshi called as Bangla is the worst kind of people in the earth i.e. rapist, murderer, braver one, flirting another wife, playboy etc. Recently, few cases are reported that Bangla raped and molested a citizen here, truly sad was the child under age being victim.

How about several inferior police officers who asking 1k ringgit malaysia from Bangla or any foreign workers every day? Would you share here how the citizen treat them like an ‘anjing kurap’?

But over a decade, the citizen never crosses in their mind that foreign workers were welcoming by the big corporations here for working in some field that the citizen can’t afford to do it. Become a restaurant waiter is the most nightmare amongst citizen even with SPM qualification, claiming that only ‘Pendatang’ does such lower class job. 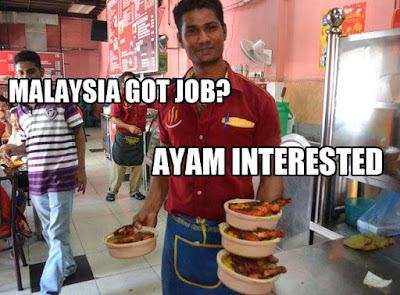 On the other hand, the Government have funded all the skill of institutions i.e. Giat Mara, IKBM, Politeknik, etc. to produce a qualified layman job in skill's area. The wiring, culinary, tourism, farming, fishery etc. – all these qualifications are held by citizen who done with their course, of course with fees. But finally, these field of job would be filled by Bangla workers without any certificate or qualification, only pay for levies and some others charges, simple.

In Sabah, prior 1970s, the Pakistan and Bangla workers who called as ‘Alaka’ or ‘Tuan Pakistan’ were the most famous mobile shop of selling clothes, make up, woman accessories etc. with payment planning programme, usually 6-12 months.

Less than a decade, they have transformed become a Taukey Kedai which majority some of main businesses are running by them. Most of them got married with citizen and manually applied for Malaysian citizenship. You can see a lot of handsome men and pretty girls and women in Sabah, they are new production of mixed marriage. The most interesting shall bear in Malay mind is they played a major role in politics too.

Hey Malay, you have told us that you won’t coming to Sabah because worth nothing. You said that Sabah nothing to asses on which any kind angle of development. Now you can see what the outcome we had, then it will goes into your countries as well. Today you say you all the hero of Ola Bola movie that afford to change the real of Olympic history. Now we can see few decades more which one the hero between you and Bangla in future Malaysia movie.

The denial, strictest rules of public universities by Malay government made Sabahan forced themselves went for private universities. That is the one of example imbalance and unfair treatment by the Malay Government Aka Orang Semenanjung. Sabahan people don’t have any way out to support any political parties because all of them are come from same root, only jumped ‘lompat katak’ join to another party if desperately lose from comfort zone BN.

Now, 1.5 million of Bangladeshi will coming soon, even though yesterday the responsible Minister announced the suspension of their arrival, but it does not mean the planning would be stopped. Sooner or later, it will be implemented.

If we called our self as human being, try to stand up at front of mirror. Ask our self, who is the Pendatang?

The history itself told us that in Peninsula Malaysia, there are 3 races of people coming into Malay Archipelago: Malay, Chinese and Indian. In meantime was in Sabah, Sulu Archipelago now naming as Sabah or Borneo was lived by Sulu, Bajau and Dusun people. These Sulu, Bajau, Dusun were not pendatang because their kingdom was conquered by the Colonial of British.

Then who can deny the right of government to bring in 1.5 millions of Bangla workers? Bangladeshi come here for their family at hometown, struggling with their oppression of life in Bangladesh. If they are keen to marry a citizen, it is not illegal because marriage is the blessing of God.

Afraid for to be molested by Bangla? No need waiting Bangla for molesting you because the case of abandoned babies is getting worst from day to day that did by citizen itself not Bangla.

So what are you afraid of? Ketuanan Melayu become Ketuanan Bangla?
Posted by sabahkini.net at 04:22