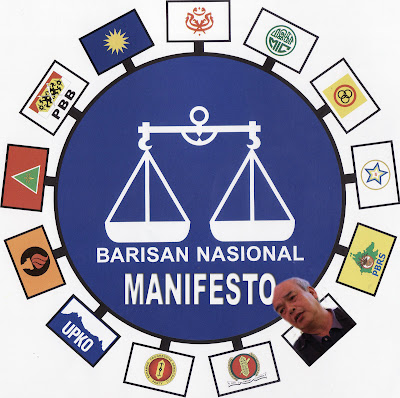 Lagadan said the division had also proposed that a trust fund be set up with yearly contribution from Petronas.

The fund, he said, should start at RM3 billion with the monies equally divided and used to abolish poverty and upgrade rural infrastructure and schools in Sabah.

He added that the proposed fund should be administered by the state government.

“But this must be done during the 10th Malaysia Plan pending the renegotiation of oil royalty, ” he said, referrring to the proposed “amicable discussions” between the state government and Putrajaya on reviewing the current 5% oil royalty.

Both Chief Ministers Musa Aman (Sabah) and Taib Mahmud (Sarawak) made a sudden turnaround on the oil royalty issue when they said they would initiate “amicable discussions” with the federal government.

Currently, both Sabah and Sarawak receive only 5% oil royalty.

The chief ministers’ statements, which were made during the Hari Raya celebrations, have given Barisan Nasional native allies here – PBS, Upko and PBRS (Parti Bersatu Rakyat Sabah) – some hope.

He said under the Petronas agreement, the royalty payment was set at 10% but was to be split between Sabah and Kuala Lumpur.

“In which case I think the immediate doable figure, to my mind, is 10%. For a start, we can almost have another 5%. This is my thinking.” he said.

Meanwhile, PBS’ opportune call for a separate manifesto appears to have been timed to coincide with Prime Minister Najib Tun Razak’s visit to Sabah this weekend.

Najib was last here in June when he received a rousing welcome (albiet staged, according to insiders) in Keningau. With him then was PBS president Joseph Pairin Kitingan who received a boost when Najib publicly declared that Pairin had his “ear”.

Najib, he said, together with wife Rosmah Mansor will also be doing his Hari Raya rounds

“This shows that the prime minister likes to be close to the people wherever they are,” said Musa.

But political analysts here believe that the current ground realities in Sabah are not favourable to Najib. They are of the view that Najib’s meeting this weekend with local Umno leaders will not be an easy one.

Posted by sabahkini.net at 11:42 No comments: 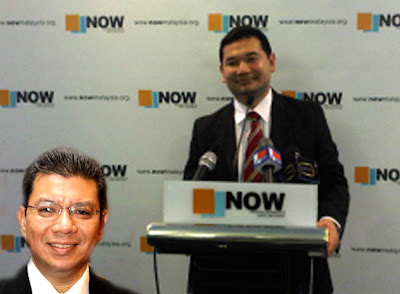 ORGANISATION.....Saifuddin Abdullah says the organisation, with regard to whistleblowers, spearheaded by PKR's Rafizi Ramli, is essential for good governance

The Temerloh MP, one of the few progressive leaders in right-wing Umno, said the formation of the National Oversight and Whistleblowers (NOW) was timely amid widespread calls for a joint public-government effort to fight corruption.

The non-profit organisation is spearheaded by PKR’s prodigal “exposé man” Rafizi Ramli, whose series of exposé on scandals implicating the Najib administration have caused much damage to the ruling coalition’s self-styled reform image just ahead of the national polls.

“We need to raise public awareness on the important role of whistleblowers. That they are not mischievous people with bad intentions, but, rather agents of change,” Saifuddin said in a statement faxed to Rafizi amidst NOW’s launching here today.

And it is exactly for the same reason the PKR man – who is also facing legal action under the country’s banking laws for his exposé on the RM250 million National Feedlot Centre scandal – had decided to set up NOW.

The timing of the project is also key. Rafizi told participants at the launching that his outfit wants to encourage whistleblowers to come forward at a time when public confidence in government agencies have dipped to an all-time low.

The PKR strategy director said NOW aims to provide an alternative to the anti-graft battle in light of the “confidence crisis” in key government institutions like the Malaysian Anti-Corruption Commission and police.

Low conviction rate over graft cases involving the “big fishes” and repeated cases of custodial deaths have forced voters to perceive the agencies with pessimism despite Prime Minister Najib Tun Razak’s vow to make the fight against corruption an important aspect of his government.

This included the introduction of the Whistleblower Protection Act. But with the charges against Rafizi and another public informant in relation to the “cow-gate” scandal, the law’s effectiveness is seen as questionable.

“I think the public generally distrusts them and this is when NOW steps in – to help whistleblowers come forward,” said Rafizi.

The centre will prepare a step-by-step process for whistleblowing, which will include offering advice to informants on the legal risks they may face with their disclosures should they agree to proceed.

This will be followed by a thorough vetting process of the credibility of the information and evidences provided before they are revealed to the public through the media.

This means Rafizi’s NOW will likely force the outfit to deal with lawsuits and prosecutions.

But any legal action against the outfit could be good for the opposition. Any prosecution will likely be seen as a move to silence the ruling coalition’s political rivals which can jeopardise Najib’s reform credentials.
Posted by sabahkini.net at 11:25 No comments: 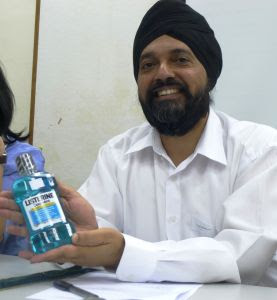 MOUTHWASH....A Gerakan politician says that Lim by using the mouthwash will speak the truth for a change.

GEORGE TOWN: Gerakan may not be in the mouthwash business but it is suggesting that Chief minister Lim Guan Eng use “Listerine”’ before he next opens his mouth.

Gerakan politician Baljit Singh has even bought a bottle of Listerine for RM8.93 from a nearby pharmacy to give to Lim as a “Merdeka gift” in conjunction with the country’s 55th Independence Day celebration tomorrow.

But Baljit is sure that the DAP secretary-general would turn it down.

“The chief minister will not accept my Merdeka gift. Do any of you want to present him my gift?” Baljit asked journalists at a press conference at the state Gerakan office here today.

Baljit said the people were getting fed up with Lim’s constant “twists and turns” to politicise, personalise, spin media tales and spread lies on anything and everything.

He suggested that Lim use the Listerine to kill all germs in his mouth the next time he starts his trademark political troubleshooting.

“Listerine would clean up and refresh his mouth and once for all stop his twisting and twirling. I’m not a Listerine salesman … it’s a mere suggestion,” said Baljit, who heads Gerakan state legal and human rights bureau.

Earlier, Baljit slammed Lim for putting up “Penang for sale” sign since assuming the chief minister’s office after the 2008 general election.

He accused Lim, formerly from Malacca, of selling off Penang and the rights of Penangites to developers.

Critics, including environmentalists, have said the projects would spell disaster for Penang island’s natural tropical greenery and hilly terrain. They also noted that the projects were all ultra vires the Penang Structural Plan (PSP) 2020.

Baljit also pointed out that Lim’s administration had approved unlimited high-density posh housing projects all over the state.

The sPICE developer has been gifted concession to build 1,500 high-density posh housing units anywhere in the state without taking into consideration infrastructural demands for proper traffic management, irrigation and drainage.

Baljit chided Lim for being too busy selling off Penang’s sea, hill, water catchment areas and flat land that he forgot to check the downslide in the state’s main revenue earner – the foreign direct investment-drivern manufacturing sector.

He noted that the state’s FDIs have reportedly worsened by 70% in first five months of this year.

“To make matters worse, many approved FDIs are not materialising while existing ones are shipping out from Penang.”

Posted by sabahkini.net at 11:16 No comments:

Posted by sabahkini.net at 11:12 No comments: