The day the hopes of Sabahan’s perished 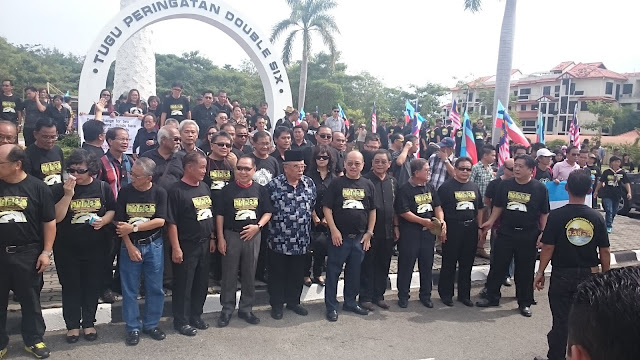 39 years ago on this day, the Nomad aircraft ferrying Sabahan leaders perished together with the hopes and future of Sabahan’s. Sabah lost their hero, Tun Fuad Stephens who was just 44 days old as Chief Minister under the newly formed Party BERJAYA, which had just defeated USNO in the 1976 State elections.

The crash of the Nomad remains a mystery until today. Shortly after the crash, rumors pointed to Fuad’s immediate successor with accusations of planned assassination. The rumors continue to this day and the suspect is well alive however retired happily ever after.

After the demise of Fuad, BERJAYA did not survive long. The mighty party was to be defeated by PBS, headed by Joseph Pairin Kitingan, just 8 years after BERJAYA had sent USNO to the opposition bench. Some reckon that if Fuad had not died on that tragic day, BERJAYA would still exist to this day.

The Chief Minister throughout the BERJAYA era was the single reason why the party was abandoned by Sabahan’s during the 1985 State election, whereby he made a decision to hand over Labuan to the Federal Government. Harris Salleh maintains till this day that the decision to surrender Labuan was a state cabinet decision and not his own.

A newly established NGO called Sunduvan Sabah has vowed that it will not rest until the Australian government releases the official findings of the tragic 6th of June 1976 crash.

Fuad was cut halfway in his fight for the Malaysian Agreement of 1963 whereby Sabah should be an equal to Malaya, meaning that we are a nation on our own which agreed to form Malaysia, together with Sarawak and Singapore.

After Singapore left the Federation of Malaysia, Fuad kept demanding that Malaya kept it’s promise of an equal partnership, which was the original cause of the political tensions between Singapore and Malaya before being expelled from the Federation.

Malaysian history tells us that Singapore left the Federation when in actual fact it was the Malaysian Parliament that voted 126 to 0 to expel Singapore from Malaysia.

An alliance of local parties from Sabah has initiated a political movement to pursue the rights of Sabahans based on the MA63. Leading the pact is Datuk Dr. Jeffrey Kitingan of the State Reform Party (STAR), and assisted by Datuk Yong Teck Lee of the Sabah Progressive Party (SAPP).

Datuk Wilfred Bumburing of the Angkatan Perubahan Sabah (APS) has also joined in the fray, throwing his support for this initiative for the sake of Sabah’s future. Will this merger be a turning point for Sabahan’s come next election?

Word has it that Sabahan’s are looking to local leaders from local parties to pursue the MA63. It would be wise to reach out to local Sarawak Parties as well to form a United Sabah & Sarawak Alliance. If bonded, both Borneo States will see a better fighting chance to regain our rights from the next Federal Government after GE 2018, whoever it may be.