FUEL PRICE INCREASE WILL EVENTUALLY BURDEN THE PEOPLE AS A WHOLE: BUMBURING 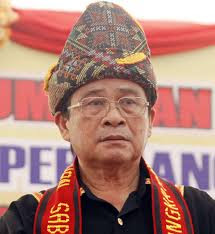 Angkatan Perubahan Sabah (APS) President YB Datuk Seri Panglima Wilfred Mojilip Bumburing said that the drastic decision by the Barisan Nasional Government in increasing the price of RON95 petrol and diesel will have negative repercussion on the people in Sabah as a whole as it will definitely spiral the cost of essential goods and services.

It is understood that the Barisan Nasional Government may have the BR1M scheme in their mind to help out the people but Bumburing who is also the State Assemblyman for N.9 Tamparuli and a former Deputy Chief Minister opined that such scheme is only a temporary measure and will not help the people in the long run.

“The people as whole will still have to buy goods from those businessmen who will very much be the ones affected by the higher cost of fuel. Even businessmen and other retailers in the rural areas  from among the BN members and supporters who find it hard to make ends meet are forwarding their grouses to me.”

He added. Bumburing in his statement said that he would have hoped that the Barisan Nasional Government would have spared Sabah from these unnecessary fuel price increases. “It would not be logical for the people of Sabah to be burden with such increases in fuel cost being the major oil producing State in the country.” Bumburing further said.

“I remember the former Minister of Energy in charge of Electricity had promised to solve the electricity problem in Sabah within three months after the GE13. However, the new Minister appointed after the GE13 have stated that it need at least three years for the government to solve the electricity problem in Sabah. We demand immediate and positive action to be taken by the authority instead of issuing conflicting statement.” He clarified.
Posted by sabahkini.net at 00:43