This Election We Vote With a Conscience 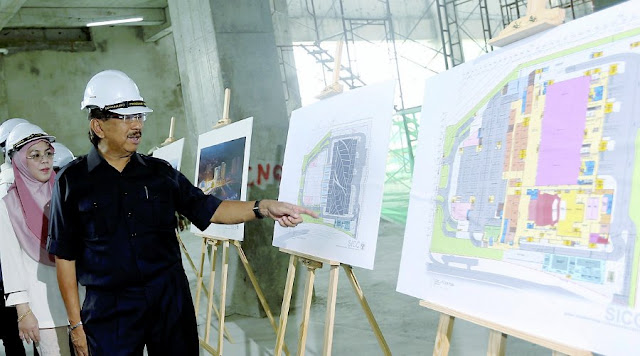 Musa....had obtained fund from Federal but unfortunately unsuccesful to maintain the project

In 2013, the Barisan Nasional led government under Musa Aman proposed a megaproject at Tanjung Aru run Tanjung Aru Eco Development Sdn Bhd (TAED) to develop the beach that the government itself failed to adequately maintain.

The TAED company proposed reclamation of the beach area, asserting that there was serious erosion that caused a significant portion of the beach to recede but this was however not the case.

The reclamation proposal that would have altered the beach and changed the landscape was met with heavy criticism by the local community and tourists.

Consequently, a group of concerned Kota Kinabalu citizens initiated awareness-raising activities in order to call a halt the proposed reclamation project by TAED. An online petition gathered more than 35,000 signatures.

Various politicians especially from the then-opposition Warisan party join the awareness movement. They promised to stop the project especially the reclamation by closing down the company, which proposed the project if they were elected as the ruling government in the upcoming elections.

Warisan was successful in capturing the state government during the elections and the local community breathed a sigh of relief that Tanjung Aru beach was now safe in hands of the new government. A Warisan-Tanjung Aru elected politician thus reiterate his promise to shut down the project.

However, this sense of relief was short-lived. The newly elected Sabah Chief Minister Shafie Apdal refused to make any decision on the project and this therefore meant that new government notwithstanding, the Tanjung Aru beach facing the threat to being “developed.”

The local community thus continues to live in constant apprehension that their beloved beach will one day to be reclaimed and turned into an international golf course and other things.

These apprehensions turned to fear in the face of denials by the same newly elected Warisan CM to have ever been against this project and other controversial projects such as the dam construction.

The TAED project was never “development.” It is the unecessary interference with a perfectly fine beach where local community and tourists habitually frequent which enjoying the picturesque landscape in a City that is expanding rapidly in terms of its built-up environment, leaving little of the original natural surroundings intact.

It is important to know that no one in the movement to save Tg. Aru beach rejects development that involves an upgrade of facilities and infrastructure of the Tanjung Aru beach as long as it does not involve the crass manipulation of what is already a naturally beautiful beach for excessive profiteering, which threatens directly and indirectly to lead to the imposition of restrictions on locals wanting free and unfettered access to the beach.

The problem with the TAED company is their controversial claims about the serious erosion of the beach on which is premised the idea of the need for land reclaimation on which inadvertantly would  be built dozens of beach condominiums, a few beach resorts and mega golf course.

That the Warisan-led government failed to close down TAED company in the aftermath of the elections is a perceived as a betrayal of its own promises.

The state needs leaders that take their campaign promises seriously and not backtrack on what they previously promised.

It is important that in this election we vote with a conscience and not to elect for politicians who have indulged in duplicity against their respective electoral constituencies.