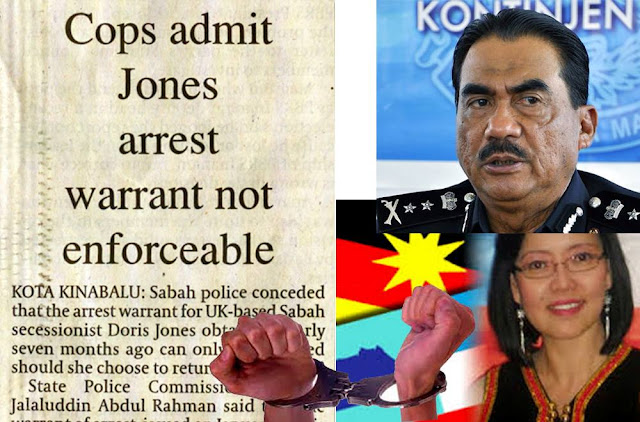 KOTA KINABALU: Sabah police conceded that the arrest warrant for UK-based Sabah secessionist Doris Jones obtained nearly seven months ago can only be enforced should she choose to return to Malaysia.

State Police Commissioner Datuk Jalaluddin Abdul Rahman said that the warrant of arrest, issued on January 16 this year, put Jones on the police’s wanted list for sedition but its powers was limited within the country.

“The warrant of arrest still stands. But in Malaysia. We can take action as soon as she comes here,” said Jalaluddin.

In February, Jalaluddin announced that police had issued the warrant for Doris Yapp Kim Young, 45, with a last known address in Labuan for offences under the Sedition Act.

Jones is believed to be behind a Facebook page “Sabah Sarawak Keluar Malaysia” which aims to promote awareness of Sabah and Sarawak rights within Malaysia and controversially also promotes discourse on secession.

Jalaluddin was previously reported as saying the local police would seek Interpol’s help in locating her but in Britain, where she is believed to be residing, the crime she is alleged to have committed is not recognised.

Jones has repeatedly denied being contacted by authorities or Interpol in the UK and yesterday, wrote on her Facebook account that she “has been waiting since last year” to be served.

A warrant of arrest was issued to founder and editor of whistleblower site Sarawak Report, Clare Rewcastle-Brown for activities detrimental to parliamentary democracy.

The Sarawak Report website was blocked in Malaysia last month for posing a “threat to national stability” after posting reports that Najib had up to RM2.6 billion deposited into his personal accounts. Lawyers have dubbed the warrant of arrest on Rewcastle-Brown as futile because of its limitations within Malaysia. (Daily Express)