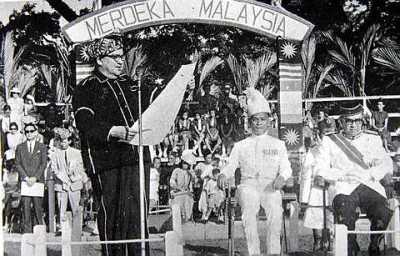 It was refreshing to see the Sarawak government organizing and marking the 52nd anniversary of Sarawak’s Independence on 22nd July and other NGOs and Sarawak nationalists and civil societies participating in the Sarawak Independence and Freedom Walk to mark the historic day in Sarawak.

In fact, hundreds of Sarawakians had participated in the Miri-Bintulu Independence Day Convoy and thousands attended the Sarawak Independence and Freedom Walk in Kuching although it was a working day and despite warnings by the federal police chief, the IGP himself, not to attend.

Sabahans especially the younger generation should be taught the true history that Sabah gained its independence on 31 August 1963 and later teamed up with the Federation of Malaya, Singapore and Sarawak to form the Federation of Malaysia on 16 September 1963.Malaysia was formed as a new nation on 16 September 1963 and there was no Malaysia before then and Malaysia was never colonized by anyone let alone Britain for it to be granted independence.

GPS and Sabahans hope that the Sabah government will take the necessary steps to organize events to mark and commemorate the 52nd anniversary of Sabah Independence this coming 31 August.  It will also be an opportunity for Sabahans to participate and at the same time better understand Sabah’s independence and the subsequent formation of Malaysia which will also instil patriotism for Sabah and Malaysia.   As such, all Sabahans and Malaysians in Sabah should celebrate and commemorate Sabah Independence Day this year.

I wish to record that similarly, we in Sabah also reject any seccession move by anyone, but stressed that “Sabah should be for Sabahans” and in that respect, the Borneonisation (or Sabahanisation) process of the Civil Service, both State and Federal level in Sabah,  as clearly stated in the 20-point agreement which formed part of the Malaysia Agreement 1963 must be honored.