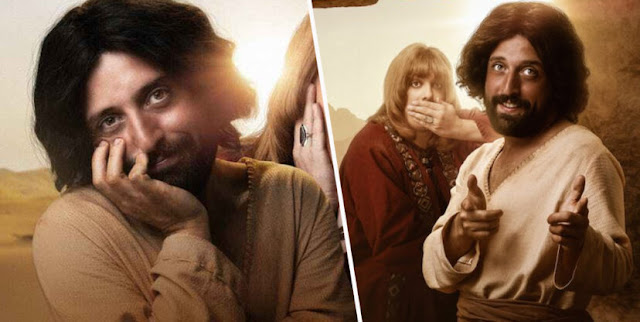 NetflixMore than 1.5 million people have signed a petition calling for Netflix to remove a comedy that depicts Jesus as gay.

The First Temptation of Christ, which was made by a YouTube comedy group, was released by the streaming service in Brazil on December 3 as a Christmas special.
Rather than bringing people together in the festive spirit, the short film has actually done the opposite, with 1,547,621 people having so far signed the petition, which states the comedy has ‘seriously offended’ Christians.
Netflix
The online petition calls on Netflix to remove the comedy and take action against its creators for their ‘crime of villainous faith’. ‘We also want public retraction, as they have seriously offended Christians,’ the petition continued.


In the one-off 46-minute show, it’s implied Jesus is in a sexual relationship with his male friend Orlando, although he wants to keep it secret from his loved ones. Netflix’s description of the show reads: ‘Jesus, who’s hitting the big 3-0, brings a surprise guest to meet the family. A Christmas special so wrong, it must be from comedians Porta dos Fundos.’
The film sees Jesus and Orlando arriving at Mary and Joseph’s house, who are throwing a birthday party for their son. Jesus tries to downplay his relationship with Orlando, who hints the pair are more than just friends.
Netflix
The story has seen some Christians express their dismay at the production, calling it ‘trash’, ‘extremely offensive to the values, principles and Christian faith’, and ‘intolerant’ to religions, according to the Daily News.
Eduardo Bolsonaro, the son of conservative Brazilian President Jair Bolsonaro, took to social media to denounce the satirical special. ‘We support freedom of expression, but is it worth attacking the belief of 86% of the population?’, he asked.
He later wrote on Twitter (translated into English): 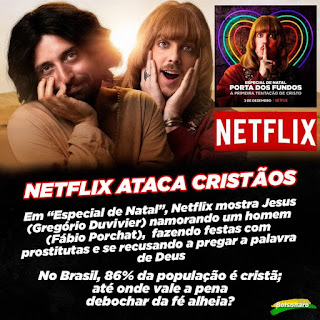 Not satisfied with interpreting Jesus Christ as gay and refusing to speak of God on Netflix, now @gduvivier went beyond. Wrote an article in @folha posing as Jesus, portraying the son of God again as gay and advocate of Karl Marx and having the reader ‘take it in the ass’.
Henrique Soares da Costa, a bishop from the state of Pernambuco, wrote on Facebook that he has cancelled his subscription to the streaming service, denouncing the film as ‘blasphemous, vulgar, and disrespectful’.
If you’ve been affected by any of these issues and want to speak to someone in confidence, contact the LGBT Foundation on 0345 3 30 30 30, 9am until 9pm Monday to Friday, and 10am until 6pm Saturday, or email helpline@lgbt.foundation
SOURCE : https://www.unilad.co.uk/film-and-tv/1-5-million-people-sign-petition-to-stop-netflix-show-depicting-jesus-as-gay/?source=facebook