6 NAMES, INCLUDING ANIFAH’S SONS, SHORTLISTED BY UMNO FOR KIMANIS 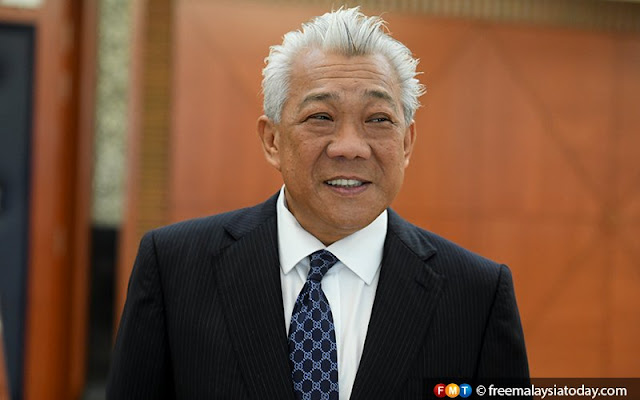 Sabah Umno chief Bung Moktar Radin says the party is open to considering former MP Anifah Aman as the by-election candidate but ‘only if Anifah is serious about it’.
KOTA KINABALU: Six names including incumbent Kimanis MP Anifah Aman’s sons, Ahmad Firdaus Anifah and Ahmad Zachry Anifah, are on the list of Sabah Umno’s choice for the Kimanis by-election.
Firdaus is the Kimanis Umno Youth chief while his younger brother, Zachry, is also active in Umno.
They did not follow their father’s footsteps in leaving the party on Sept 19 last year.


Sabah Umno chief Bung Moktar Radin confirmed that Anifah’s sons are among the names shortlisted to be candidates for the Kimanis by-election.
The other names include former Bongawan assemblyman Mohamad Alamin, who is Sabah Umno Kimanis chief. He is a former district officer and a Universiti Malaysia Sabah (UMS) lecturer.
Bung refused to name the two candidates but party sources identified them as UMS lecturer Saat Ag Damit and former civil servant Ahmad Gais.
“There are five to six names. But we are still finalising them. We will announce who our candidate is one week before nomination day,” he told FMT today.
Alamin has emerged as the top choice as he had served as Bongawan assemblyman before this and was therefore said to have good grassroots support in Kimanis.
Bongawan is a state seat under the Kimanis federal seat.
In the 14th general election, Alamin lost the Bongawan seat by 795 votes to Warisan’s Daud Yusof.
Alamin is likely to face a challenge from Firdaus, who is also well known to Kimanis voters.
However, little information is available on his brother, Zachry.
Sabah Umno now has the authority to choose its own election candidates after the party was granted autonomy at the recently-concluded Umno general assembly.
Bung, who is Kinabatangan MP, said the party is also open to considering Anifah as the by-election candidate but “only if Anifah is serious about it”.
Anifah who was three-term Kimanis MP, did not respond to FMT when contacted over the Sabah Umno suggestion.
The former foreign minister had earlier said he needed to consult his constituents whether to contest in the by-election after the Federal Court dismissed his appeal to declare him the lawful Kimanis MP.
On Dec 2, the Federal Court decided to uphold the election court’s August declaration that the Kimanis election result was null and void, thus paving the way for the by-election.
The Election Commission is expected to meet on Monday to discuss the by-election.
SOURCE : FREEMALAYSIATODAY