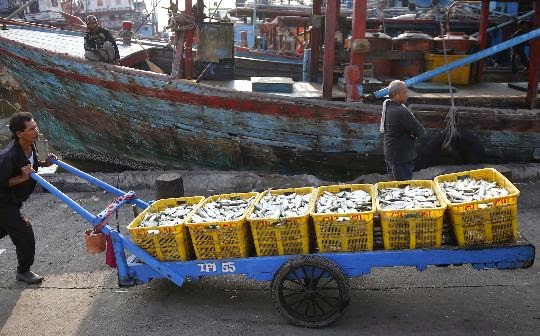 A porter pushes a cart filled with fish from a fishing boat which docked in Muara Angke port in Jakarta last week. Illegal fishing in Indonesian waters costs the country up to US$25 billion a year. - Reuters pic, November 19, 2014.

A crackdown on illegal fishing, which costs the vast archipelagic nation around US$25 billion (RM84 billion) a year, kicked off this week, Cabinet Secretary Andi Widjajanto told Reuters in a rare interview.

The drive is likely to spark tension with countries in the region, as new President Joko Widodo adopts a more assertive stance on the maritime sector of Southeast Asia's largest economy.

"The president has said our maritime sector is in a state of emergency... so we need a new, bold approach and that's why he's declared a war on illegal fishing," said Widjajanto, an expert on defence and foreign affairs.

"We are trying to send a clear message to our neighbours like Malaysia and China, which operate illegal ships in our territory, that this is not a normal situation for us."

Widjajanto said he expected at least 300 more illegal fishermen to be detained in the next few days.

The comments follow strong rhetoric from Widodo, who called this week for foreign ships to be sunk if they were discovered sailing without permission in Indonesian waters.

"Sink 10 to 20," the Jakarta Post newspaper reported Widodo as saying. "It would make them think," he added, referring to illegal fishermen.
"But remember to rescue the onboard crew first."

Indonesia also plans to lodge diplomatic protests with the countries involved, to pre-empt complaints over the capture of their citizens, said Widjajanto.