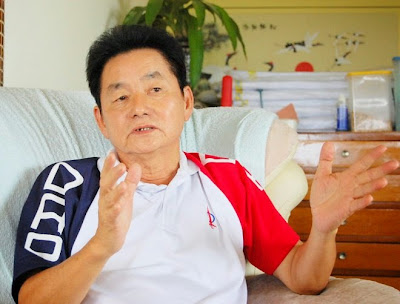 Chairman of Sabah Democratic Action Party, Jimmy Wong Tze Pin urged the government to dismiss Hishammudin Rahim as the Malaysian Anti Corruption Commission (MACC) Sabah Chief since the government has already admitted its negligence in the murder trial of Teoh Beng Hock, in order to show that the government is consistent in relation to the aforementioned admission.

Teoh’s family was filing the civil suit on 3 October 2012 and represented by the Puchong MP, Gobind Singh, to sue the MACC, the Federal Government and ten MACC officers on negligence, hurt and violence against Teoh Beong Hock which resulted his death. Yesterday, the government admitted its negligence and agreed to pay RM66K as the compensation to Teoh’s family, in the final settlement for this civil suit.

Wong pointed, besides Hishammudin Rahim, the other MACC officers should also brought to face the punishment or being prosecuted in the court, especially the two officers which were mentioned in the RCI report, that is,  investigating officer, Anuar and assistant investigating officer, Ashraf.
“The RCI described Hishammudin as an arrogant leader, and pointed that he applied excessive violence on Teoh Beng Hock. He also lied during the trial claimed that he is ignorant about the police reports that filed against his subordinates who tortured the witnessed.”

On 5 September 2014, the Court of Appeal ruled that Teoh Beng Hock was fell down from 12 floors of Massalam Building in Shah Alam, Selangor, the injuries on his body are caused by the illegal acts, which implicated the MACC officers who responsible to detain Teoh Beng Hock.

Wong stressed that, the verdict of the Court of Appeal and the outcome of the settlement in civil suit, show that the government and MACC are no way to evade the responsibilities; therefore MACC should sack those involving officers immediately, including the state directors.

“The current Sabah MACC director Hishammudin was previously holding the post of Selangor MACC Deputy Director, after the death of Teoh, Hishammudin not only escape the justice but being promoted as the Director of Negeri Sembilan MACC, before being transferred to Sabah to head the state's MACC, and this is so outrageous!

Wong said that if the government already admitted on its negligence, then all the officers that involved in the case should face the consequences too, but if the government does not undertake any action against them, then this is akin to self-contradiction.

“Worse still, these people are still sitting in their office and enjoying all the benefits, but Teoh’s family has lost their love one, if the government is just agree to compensate but let the murderers remain at large, this is hypocrite and utterly unconvincing.”

He said that although the civil suit has come to an end, but the police and the Attorney General's Chamber still have unfinished job, which is arresting the perpetrators and get the justice done, the Teoh family certainly deserves the truth. And this can only end the whole case.

“As what Beng Hock’s sister Teoh Lee Lan told Malaysiakini, is life so cheap that it only worth RM60K? The settlement in the civil suit is only a ‘bitter victory’ for the Teoh’s family, what they really want is not the monetary compensation, because life is invaluable. What we want is the truth and some people can responsible for this lost life!”