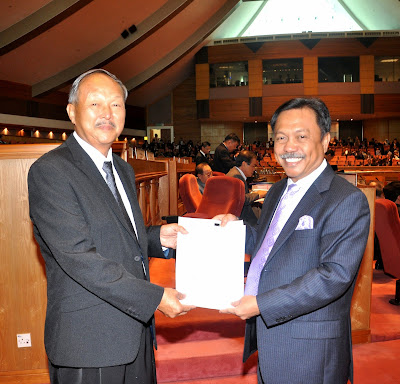 New bus services have been approved by the Sabah Commercial Licensing Board (LPKP) on the major roads in Kota Kinabalu City.

In disclosing this, the MCA Luyang Assemblyman Dr. Hiew King Cheu today said the problem of lack of public transport in Kota Kinabalu City will see an improvement. This is through his request on behalf of a new bus company to LPKP to approve more buses on the road and at the same time to cover the areas in KK where there is no bus service now. The public has been complaining about not enough bus service, and the traffic congestion in KK. This approval came at the right time to solve much of the problem.

On receiving the letters of approval on behalf of the bus company from the Chairman of Sabah Vehicle Licensing Board YB Dato’ Hj Mohd Yusof Hj Apdal recently, Hiew thanked YB Yusof for he has been very supportive to work out the plans and proposals to increase the bus routes in KK and approved three new bus routes where at the moment there is no bus service.

The new routes are:- (1) the Penampang By-Pass from Sembulan, QEH2, Sri Kepayan, Millennium, to Donggogon, (2) Kolombong to Taman Khidmat, Bukit Padang and Bundusan  (3) from Tuaran By-Pass Sepanggar Junction on to Jalan Lintas and back.

The MCA Luyang Assemblyman Hiew King Cheu said the new bus routes will provide convenient to the people who have no car and need to use the public transport to go to work. He hopes that the people will make more use of the bus services and leave their cars at home to go to work. By doing so, the KK traffic jams and lack of car parking space will be much reduced.

More details of the new bus services will be disclosed at the later stages.