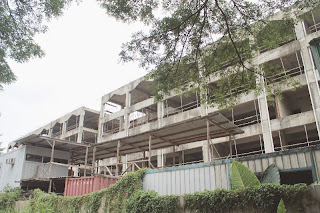 A question was raised by the MCA Luyang State Assemblyman Dr. Hiew King Cheu during the recent assembly sitting. He asked on the future plan on the abandoned commercial complex which is known as The Star City in Kota Kinabalu.

The reply from the Chief Minister Department said that the land owner SUDC is a subsidiary company under SEDCO and it is at moment using Section 176 of the “Scheme of Arrangement” under the Companies Act 1965 to revive the Star City project which was abandoned some years ago. This has affected many purchasers when the previous joint-venture developer abandoned the project.

Under the Save Star City scheme, an eligible investor who is qualified with adequate financial resources including experiences to complete the project was selected.   Price Waterhouse Cooper (PWC) is appointed as the guarantor and the team consisting of the following: -

a. The white Knight (Investor)
b. SEDCO / SUDC as landowners
c. KFH and HSBC (Scheme creditors)
d. The buyer and other loan providers

Once White Knight (Investor) have reached an agreement on what to do, and how much is to be paid to SEDCO / SUDC and involving all the "scheme creditors" which are the bank loan financers and the buyers. Then PWC will submit the scheme to the High Court to apply for a caveat on the skim.  The scheme shall bring together all the parties involved.  Any one of the parties does not agree to the terms and conditions laid out under this proposed scheme offered by the White Knight, the scheme will fail.

From the ground, this is a good news for the purchasers for who had been stuck for a long time for not having a completed mall to carry with their business plan, and it is a big financial lost to them. Further to that, there are too many uncertainties whether the new arrangement will kick off smoothly as planned. The purchasers are not too enthusiastic on the revitalization scheme.

Hiew wishes all the parties can work hand in hand to make the scheme to revive Star City successful. It is only possible through the committed effort of those who are involved.
Posted by sabahkini.net at 13:48