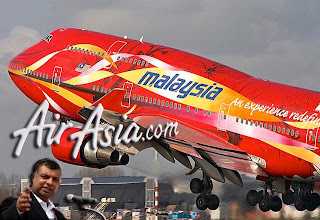 DAP Sabah called for BN government to cancel the monopolistic collaboration between Malaysia Airlines (MAS) and Air Asia for the betterment of all Malaysians.

Junz Wong, DAP Sabah state assistant secretary said the collaboration between MAS and Air Asia will only cause more difficulties to Malaysians and air travellers. They will soon increase the air fares in no time.

1) increase in airport tax in KKIA almost immediately after announcement of the collaborations between MAS and Air Asia.

3) lack of flight availability to Kota Kinabalu following the announcement of firefly to ease operations by 4 Dec 2011.

We have received numerous complaints, thousands of Malaysians have already suffered in the form of flight cancellations. Junz said. This is the kind of services consumers will get when there is monopoly which were a result of the monopolistic tie-up.

The MAS and Air Asia collaboration announced on August 9 has indeed proven to be terrible for Malaysian consumers and air travellers, Junz expressed his concerns.

Soon travellers will next face higher airfares as a result of the strategic tie up.

‘People First’ BN government should dissolve the collaboration between MAS and Air Asia and let the two giant airlines compete like it used to be. This will only benefit consumers and airlines themselves.

Junz emphasized that fewer air travelers will lead to less economic activity such as less demand for taxis, hotels and related tourism activities. This will do no good to nobody in the long run.