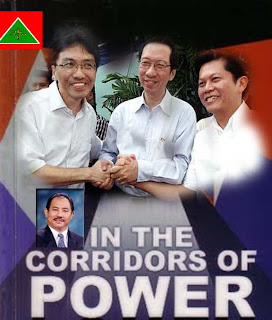 INDUSTRIAL Development Minister Datuk Raymond Tan Shu Kiah has mistaken the hard truth for ‘rudeness and unfriendly’ when responding to the criticisms by his Barisan Nasional (BN) colleagues that his party, Gerakan is irrelevant and should not field candidates in Sabah.

Sabah Progressive Party (SAPP) Information Chief, Chong Pit Fah said in fact Tan and Elopura Assemblyman, Au Kam Wah, who had joined Gerakan after leaving SAPP when it ditched the BN on Sept 17, 2008, had lost the respect of their BN colleagues.

“Now that Raymond Tan and Au Kam Wah have lost face and the respect of their BN colleagues, the only honourable thing for them to do is to resign all their government posts immediately,” Chong said in a statement here Tuesday.

Tan was also a Deputy Chief Minister when he was the deputy president of SAPP prior to the Sept 17, 2008 SAPP exodus from BN, while Au was the Youth Chief of SAPP.

Both, however, disagreed with the SAPP leadership’s decision to leave the ruling BN government after these two failed to take note of the “window of opportunity” that SAPP believed would address pertinent issues affecting Sabah.

After several months in political wilderness, Tan and Au decided to join Gerakan, gifting the peninsular-based party, two state seats in the process.

Tan was appointed as one of the vice presidents later.

The prospect of Gerakan being given the three seats and contest in the coming General Election had received negative feedback from within the BN itself.

It began with Umno MP for Kalabakan, Datuk Abdul Ghapur Salleh who during his Budget Debate speech urged the Prime Minister Datuk Seri Najib Tun Razak to consider against fielding any candidate from Gerakan in the coming election.

He said it had been proven in the last election that Gerakan had been rejected by the people in Semenanjung and what more in Sabah, should it contest in the state in the 13th General Election.

His sentiment was shared by former Libaran MP Akbar Khan Abdul Rahman who said the State BN leadership must consider Ghapur’s view because it came from the grassroots.

Later, LDP joined in the bandwagon saying that ‘although the truth might be bitter’ but the leadership must consider that winnable candidate must come from a winnable political party.

Other BN leaders like Umno supreme council member, Datuk Lajim Ukin and Parti Bersatu Rakyat Sabah (PBRS) President Tan Sri Joseph Kurup echoed similar view and said that there were already too many political parties in Sabah and that Gerakan should instead concentrate on getting their seats back in the Peninsular Malaysia.

Tan speaking for the first time on the matter had called the BN component leaders ‘to stop the harsh words being used against his party’.

He was reported as saying that he declined to be engaged in the debate on the issue and preferred to raise it during the BN meeting but that he was concerned about the image of Gerakan.

“Sabah Gerakan had already shown that it has good leaders. We are just asking for the opportunity like any other BN component party to contest in order to defend BN in Sabah,” said Tan.

Tan continued to be a State Cabinet member and but had to relinquish his Deputy Chief Minister post (for the Chinese quota) when he joined Gerakan.

Now that they have lost face, Chong said Tan must resign from his Cabinet post as well as the KKIP chairmanship, so as Au who had been appointed as the Chairman of the Sabah Energy Corporation.