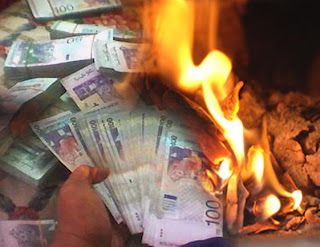 What astonish me is little is felt here in many rural areas in Sabah. I have travelled to many parts of Sabah in recent times and i found it scaring to claim that those billions were ever spent for the Sabahan people.

Not even small bridges and short good roads could be built in many of those places i visited. In Penampang, Inanam, Papar, Kota Belud, Keningau, Tambunan, Kudat not to mention Nabawan, Sook, Banggi and some of the remote places in Ranau, Pitas, Kota Marudu; very little is done on upgrading public amenities like kampung roads and agricultural roads, hanging bridges, small crossing wooden bridges was left rotting. Don't talk about drainage in the kampongs, it is almost non-existent.

Chief Minister Musa Aman and especially DCM Joseph Pairin Kitingan must explain why thousands of hanging bridges in the rural areas are left unattended for decades, some still being used by schoolchildren, exposing them on a daily basis.

Being an elderlyman of 71 now, i pity our Sabahan people for being taken for granted so easily and cheaply, being duped into believing they are well taken care off by the governments who pour in billions of ringgits every year. In reality, the situations in the rural have become relatively worse in term of development now as in the 1970s and even 80s, not much money was spent on Sabah by the Federal Government.

Those younger people must raise their voice and learn to be bold to demand courteously from their YBs, the District Officers and all the top civil servants who are in the decision-making team.

They must ask why their roads are not tarred or upgraded, or why their balairayas are dilapidated, why no new infrastructures provided? They should demand to see how the district office and YBs spent their allocation?

In fact the people, being registered voters, can give ultimatum to the YBs, DOs, and political parties. If they know how to use their vote banks, they would be able to create a change in the political landscape and hence developments in their own respective areas in future.

There is no use for the Auditor-General to spell out all mispendings every year when the people, the real beneficiaries of this public money, are denied the rights to participate, plan and monitor how the yearly allocation are being spend in each district or constituency.