NO ‘PASAH’ IMMIGRATION COUNTER AS PROMISE 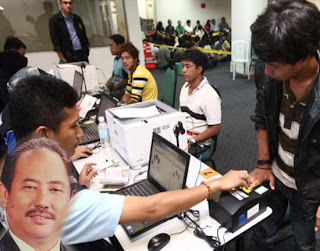 MANY employers who wanted to register their legal workers under the Legal Foreign Workers’ Registration Biometric Programme (Pasah) saw red on Wednesday when realising no immigration officials were around at the Penampang Sigar Hall in Tuavon that the State Immigration Director Muhammad Mentek said will be opened even during public holidays.

Sabah Progressive Party (SAPP) Information Chief, Chong Pit Fah said he received many complaints from frustrated employers about the matter who took the opportunity to register their workers during the Deepavali public holiday.

“They saw the report in the Daily Express about the Director saying that the Immigration Department would be using the centre in Tuavon Penampang for employers to register their legal workers until end of this month including on public holidays.

“But, they went home frustrated as they will not be able to do anything at the centre. They only realised about it when seeing the small piece of paper on the notice board that registration (on Wednesday Oct 26) was only being done at the Immigration offices,” he said.

The small notice was only seen by them after they had been waiting for a quite some time.

Chong said if the department was serious such notice should be made a little bit bigger so that people could immediately see it and go home instead of waiting for something that will never come on that day.

The State Immigration Director was reported as saying that about 25 per cent of the 237,338 legal foreign workers in Sabah had been registered by their employers for the Pasah.

He said employers in Sabah have until end of this month to do so, hence he announced that besides the Immigration offices in several districts, a few centres namely the one in Tuavon would also be among the venue for the registration drive.