MALAYSIA'S OLD REGIME HAS ITS WAY, WITH FEW REGRETS 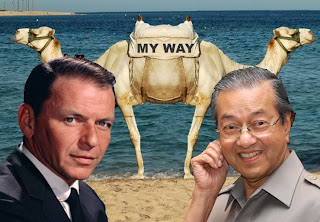 IN EVERY KARAOKE joint, every function, every party, every gathering, Frank Sinatra’s ‘My Way’ remains a firm favourite for Malaysian politicians. Old Malaysian politicians, that is. It is a Freudian slip as to how they feel about themselves, how absolutely satisfied and bloated they are with the pride of having risen up the ranks to be nothing more than ‘servants of the people’. Do not be mistaken. They do not enter politics to become ‘servants of God’ because that’s not how they want to be judged.

They place themselves in the hands of the masses for a reason: to be servants of the people where the people becomes their God. As politicians, they have no choice but to compromise every value, every principle and every reason to bow to the will of the people.

When they do not conform, they are nothing more than a servant that must be replaced. There lies every politician’s epitaph; there lies their obituary ending. There lies the earthly power of the People God.

When the People God rises against the regime it is because the political servants have decided to become the Masters. And the masses, the critical mass of people that makes the People God, are ready to make their stand and impose their judgments. Poor, foolish servants who think they can rise from beneath the feet of a God.

By reducing themselves to the status of servants, politicians face the same treatment as foreign maids do in this country from time to time. They should not expect any better. The best politicians allow their People God to speak so that the masses can get it out of their ethereal and perfect system, to find their divine satisfaction in mortal human sins and wallow in their miserable impoverished lives of mass ‘servant’ destruction.

That’s where the People God’s strength really lies: DESTRUCTION. It is that force that will continue to spread across the nation like an ebola virus to destroy servants who have become too big for their own rubber boots.

Yet, ‘My Way’ is a reflection of age and closure. Despite the song, they are not ready to leave because every politician in this country is still trying to impose their ways on all of us.

Najib realises this. He tried hip hop. He tried fashion. He tried the facebook. He tried to find his inner childhood. He tried to show his compassion. He tried to drive reason to all the servants of the people that if they are done with their ways, they can bow out gracefully for the young to take over. Yet, not one old tired face, not one political oldie, not one decrepit evergreen would like to end their song just yet. They can’t sing but we somehow must continue to listen to their broken melodies. Why is this, we wonder?

The answer lies in our political wonder sage, the Yoda of the nation, the one who loves his way more than anybody else: MAHATHIR. No, not Mahatma; that guy was willing to die for a cause. No. Mahathir: the rebel without a cause.

Thanks to Mahathir, we have at least two generations of decrepit leaders and their protégés still spouting the same old dogma, the same old rhetoric, and spinning the same old broken record. It grates the nerves, it makes us puke, it makes us want to draw up interesting caricatures for our toilet paper as they do in Britain.

Practically every Barisan Nasional leader that sits on their little pedestals today with their noses turned up are happy to spin his song and live by his standards. Especially the politicians who have somehow deluded themselves into thinking that they have fixed deposits in Gringotts Wizarding Bank; that’s right, the money you never see as Mudbloods.

The standard that makes us believe that we’re far too important for the rest of the world. The standard that allows us to be like a Loa Loa worm as we blind the vision of every person in this nation so that we can continue to survive as parasites of each other. Yoda has indeed spoken.

Yet, standards fall apart over time when they go against the grain of what is now accepted as international norms and common cultural behaviours. The young People God will replace their ageing servants.

Malaysia is heading for a change unprecedented in time and unless Najib makes a firm stand to replace the entire Barisan Nasional candidate line-up with new faces and shove the has-beens to their old karaoke joints to sing their ways to each other till they can sing no more, the ruling regime will fade in the smoking embers of the Death Star.

It is a shame. Najib is a highly intelligent leader. I do not judge him on his personal issues, the story of Altantuya, the slanders against his wife. Look at him critically. Here is a man who tells the old farts to take a hike and make way for more popular songs.

Here is a man who will have the international gravitas to work with Anwar for a more unified Malaysia (don’t ever dismiss this possibility for in a decent man there is a heart that forgives and moves on).

Najib’s integrity, tenacity, compassion and courage are scrutinised at this time. Yet, the old goblins will watch steadily from the sides for they have much to lose if Gringotts falls to pieces like Barings. If Najib isn’t their man, they’ll replace him with a Dark Lord.

As every politician in this country tries to ‘bite off more than [they] could chew’ (thanks for the quote, Frank), I learnt my lowest form of wit-sarcasm-from the guru of it all: TUN ‘YODA’ MAHATHIR. Like Yoda, he will probably live to 900 years old and (as I pause for another momentous vomit session), we may have to live by his rules for another millennium.

What makes it worse is that, heaven forbid, he may resurrect as Voldermort!

Luke Skywalker and Harry Potter were young little heroes who saved their regimes against old, nasty dictators. This nation must hunt for their young Jedis and their young wizards, their saving grace, their rays of hope, and convince the People God that they will make far better servants and do so before the next election. Whether it’s Anwar or Najib, PR or BN, the servants must now be young and new, and may the best man win!

For now the end is near and we will face the final curtain, so let’s say it clear, let’s state our case, for which we must be certain (thanks again, Frank).