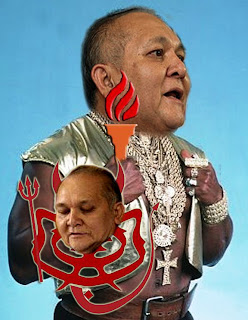 KDM MALAYSIA a desperate attempt to entice KDMs to Umno Datuk John Ambrose, as the founder and President of the newly registered KDM Malaysia (KDMM) has been making a lot of publicity about the new association. Immediately we can sense that, although it is an NGO, it is not your usual type of voluntary organization.

Firstly, it unashamedly declared that it number one purpose is to get KDMs to support Umno. KDMM has no intention to go into cultural and identity preservation work for the KDMs. It aims mainly to break the KDMs further by enticing them to Umno, i.e. away from PBS, Upko, PBRS and the opposition.

So Datuk Dr. Jeffrey Kitingan is right in saying it a tool of divide and rule by Barisan Nasional. The first question that comes to our mind when contemplating on the honest and open declaration by Ambrose is: Why the need for KDMM to help Umno? Can’t Umno, on its own credential as a political party, have enough attraction to entice KDMs to join it?

Does Umno Penampang believe that it can entice firstly the people of Penampang to join Umno by getting them to love KDMM first and then later to love and embrace Umno?

Does Ambrose believe he can use the same formula being used by PBS (to entice people by getting them to join KDCA first and then join PBS)?

In May this year, after Ambrose belatedly formed the Umno KDM Task Force to ingratiate himself to Umno, the Sabah Barisan Nasional (BN) Youth Secretary cum Kimanis Umno Chief, Mohamad bin Alamin strangely made a harsh attack to tell Ambrose that, "Having the task force in the party may cause disunity and create racial factions. It will also encourage other leaders from different ethnic groups in Umno and BN to create similar task force to safeguard and serve their respective communities. Who knows may be the Brunei or Bajau leaders also want to establish a similar task force group to ensure their rights are also taken care of and such situation can lead to disunity without us realising it.”

He said the task force was illegal because it wasn’t part of the Umno Constitution and never got any sanction from the Umno Supreme Council. We can smell that Mohamad was jealous because he couldn’t form a Malay Task Force in Umno because it would look ridiculous. Or was he afraid that Ambrose could increase his (Ambrose’s) popularity too much in Umno, and that Ambrose could become too important and bigheaded?

Isn’t this a case of a condescending attitude on the part of Umno who must ensure the Malays keep being the seniors in the party and KDMs shouldn’t try to be too smart and overtake the bossy Malays who are supposed to be from a greater race of people?

Most importantly, Mohamad pointed out that, “There is no need to have a Malaysia Umno KDM Task Force as having Sabah Umno here is already sufficient to meet the needs and interests of all races including the KDM through the BN component parties.”

But most importantly he pointed there is NO NEED for a KDM Task Force in Umno. He also conveniently missed the point that task forces of various radical groups in Umno would try to get support for Umno and not to compete for positions.

But now that Ambrose has circumvented this silly protest by Mohamad, and registering and announced KDMM, what can Mohamad say anymore? Why doesn’t he say this is wrong because then the Bajaus will now have to form and register Bajau Malaysia, the Bruneis Brunei Malaysia, the Indonesians Indonesia Malaysia, the Suluks Suluk Malaysia and the Malays Malay Malaysia?

So far no Umno leader had responded to KDMM’s announcement. But we need to ask again: What is KDMM really for? It is, again, by Ambrose’s own admission, strictly for a political purpose, i.e. to try to increase KDMs’ support for Umno.

The obvious question is, why? It clearly means Umno Sabah has failed to get enough support from the KDMs. But we wonder how many KDMs with enough intelligence would rush to join KDM Malaysia because Ambrose said they will be encouraged to support Umno as well!

Ambrose also proudly announced KDMM will undertake welfare programs to build houses for the KDMs which begs the question: Where will KDMM get the money to build thousands of houses for the poor?

If it aims to get funding from the government for this project, then what is the PPRT program for and won't KDMM clash also with the ministry of Rural Development? And will KDMM behave like a political party by campaigning for political support and asking for project allocations as if it is a political party, and as if Ambrose was an Assemblyman or a Member of Parliament?

Isn’t it the more the merrier? What’s so special about KDMM that only it can get rural development allocations while the other similar association can’t? Is it because Ambrose is the blue-eyed boy of Najib and Rosmah?

What KDMM aims to do may be noble but it has the potential of creating precedents with very unpleasant consequences. As is always in cases of NGOs having stated political leanings to a certain party, KDMM can’t escape from the problem of conflicts of interests.

Ambrose claims there is no conflict of interest in KDMM supporting Umno, but how about the situation of some members who joined the association but are interested only to help the KDM communities voluntarily but are not interested in politics, or have a dislike for Umno?

One way or another they will be seen as pro-Umno or pro-BN, just like the KDCA members are seen as pro-PBS. If they are members of the opposition, will they be accepted into KDMM? Will present KDMM members who are now pro-Umno later decide to support the opposition?

If so, what if they spend some of their time campaigning for the opposition, and against Umno and BN? And what if they are holding high positions in KDMM as well? Will Ambrose tolerate them for long?

They can even gather enough support to oust Ambrose and take over the KDMM, and convert the association into a apolitical entity or even become pro-opposition! This proves that Ambrose was lying through his teeth when he said there was no conflict of interest in KDMM being pro-Umno. Maybe Ambrose might as well convert KDMM into a political party and stop all the lame pretences and lies.