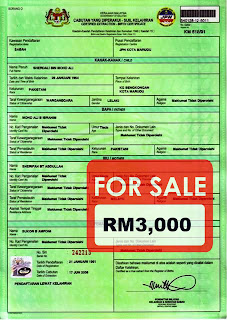 I would like to share with you and to all Sabahans who are very concerned with the increasing numbers of foreigners in our beloved state, on a very shocking revelation pertaining the said issue. The numbers may be increasing, but what most of us do not know is, their children are becoming legal citizens of this country, incognito.

We found out about this when we went for our regular trip to a ‘rombengan’ where we listened in awful shock, the story of a Timorese-Tator lady, owner of one of the rombengan stalls, who got her child to have a legal birth certificate.

She and her husband are legal workers here. They have their passports and whatnots. They seem to be making quite a fortune here, too. Of course, they want their children to have a good life too.

Sabah seems to be a good place to raise their kids. They have enough money to buy a way in for their kids in this country. And apparently, every foreigner who makes enough money will buy their kids the chance to be Malaysian.

With RM3000, they can get their kids to have a birth certificate. They would pay the locals deep in the rural area this amount of money to get them to bring their newborns to the registration department.

These foreigner babies would then be christened according to the locals’ family name. And their race? Would be according to that said locals. And just like that, these foreigner kids are legally local. How the registration department could allow such things, we would never know.

She didn’t end her story there. Probably when she started talking, she couldn’t stop. We just put on our best poker face in fear she’d stop when she realised we were extremely appalled. When their kids reach twelve, they then will seek the same local family for one more transaction.

Another RM1,000 to bring their children to get their identification cards done. They now can go to school like the locals, and enjoy the benefits of the locals, despite having passport holder parents. And nine years later, they will be eligible to vote for the governing power that can fulfil their needs and protect their rights.

So now, their secret is out on the open. It may not be a well-known secret, but I really hope that Sabahkini.net can do its part in making sure the people are aware of such disgusting ‘transactions’.

I also hope that those people in power can do something about this horrific issue. We do not know how long this thing as has been going it, but one thing is for sure, if it continues; we, the locals will soon be outnumbered, and doomed.