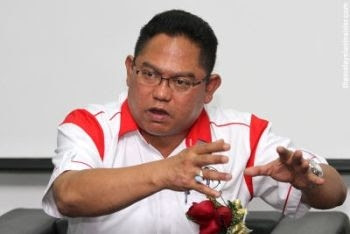 Charge the person who uploaded photographs of pupils of SK Seri Pristana eating in the school's shower room with sedition?

No way, said teacher and parent bodies, which wanted the authorities to end the sideshow surrounding the incident and instead focus on improving education and answering more pertinent questions raised by the episode.

They were reacting to a call from the Selangor Umno liaison committee chairman Datuk Seri Noh Omar (pic) who urged the authorities to charge those responsible for uploading the photographs with sedition. He said this after visiting the school earlier today.

The photographs which were uploaded on a Facebook page belonging to a parent who wished to be known as Guneswari, caused an uproar against the headmaster and the school.

The headmaster, Mohamad Nasir Mohd Noor, had earlier apologised to parents but later lodged a police report alleging that the photographs had created tension.

National Union of Teaching Profession (NUTP) president Hashim Adnan said the headmaster had apologised and the deputy education minister had visited the school and said the matter was "settled", and that it was "not linked to race or religion".

“Now you want to charge the person responsible for uploading the photograph with sedition?” he asked.

“Let them upload the photographs. The photographs are not pornography.
"We should not make a mockery of this. Let the matter rest."

ashim said there are so many more other things to do, for example to strive for better quality education.

“This has nothing to do with race. If you see the comments on Facebook, even Muslims were on her (the parent identified as Guneswari) side. This was just a poor decision made by the school. There is no issue here,” she said.

“In fact, we should be looking at other more serious issues such as the over enrolment of pupils. Why aren’t the authorities looking into this instead?”

“Let us all just cool down. The parent who uploaded the photograph probably just wanted some kind of response. We have to be rational and understanding,” he said.

Meanwhile, MCA Youth chief Datuk Wee Ka Siong in a text message said: “I disagree (with Noh’s statement). How can one relate uploading the photograph with sedition?

“And even if it is true, what is the justification to punish the whistleblower?” Wee asked. (THE MALAYSIAN INSIDER)
Posted by sabahkini.net at 15:34