RM50MILLION FOR ROAD UPGRADE ROADWORKS FOR SABAHAN IS AN INSULT – PKR SABAH. 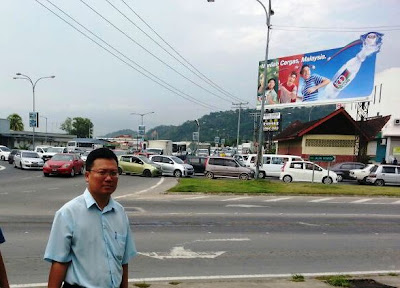 Yb Dr Roland Chia was responding to Deputy Minister of Works – Datuk Rosnah Shirlin on the meager allocation of RM50 Million for road works to Sabah last year. The RM50 Million is an insult to Sabahans – for Sabah being one of the largest producing state for oil & gas contributing Billion of Ringgit Malaysia to the federal coffers.

This is the main reason why we want to increase of oil royalty from five per cent to 20 per cent. YB Dr Roland Chia was saying this while visiting the congestion site in Jalan Kionsom, Inanam today.

What can the Sabah State Public Works Department do with RM50Million for the road works in Sabah which is twice the size of Pahang? There is no point of announcing new road works to the public to pacify them. The public wants to know when is the actual date of commencement of implementation of the road works.

The present dilemma will be reason that the State Public Works Department cannot  implement the various plans under the 10th Malaysian Plan as soon as possible due to funding problems.

Yb Dr Roland Chia urged immediate disbursement of funds in view of the current worsening traffic congestion due to delayed implementation of the propose highways and also the bypass linking the City of Kota Kinabalu to Inanam, Menggatal , Penampang and beyond.
According to Dr Chia, the worst traffic congestion now is within the city area, affecting six parliamentary constituencies, including his where he receives complaints regarding the problem almost on daily basis.

He also said that the flyover at Mile 5 ½ and the upgrading of lanes from two lanes to three lanes in Jalan Lintas-Jalan Tuaran Bypass, Jalan Tuaran and roads leading into the industrial areas in Kolombong should be commenced as soon as possible i.e the bridge and roads linking Jalan Lintas to Jalan Mangga that is at the heart of Kolombong Industrial Estate should be upgraded as soon as possible. This is critical to the locals and by doing this it would alleviate the traffic congestion of all affected areas here.

Jalan Kionsom, Inanam is the other main road that is heavily congested. Roads users have been complaining that daily it takes them 2-3 hours to get back home from the city. This is totally unacceptable for many. The Inanam-Kionsom bypass must be constructed immediately rather that pending funds from the treasury.

“We hope the construction of a third lane along the Jalan Lintas Roads can commence immediately before next year because the new Chinese primary school is expecting their first intake and that can add further to the traffic congestion.

“What the people want is just a response from the government of the day how to resolve the traffic and road congestion,” Dr Chia said.
Posted by sabahkini.net at 21:43