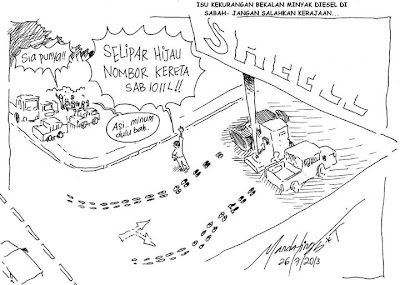 Kota Kinabalu:     “The Federal and Sabah governments must find long-term solutions to the diesel shortage problems in Sabah so that it does not recur again and stop providing piece-meal patch-work solutions” said Datuk Dr. Jeffrey Kitingan, STAR Sabah Chief, in response to the request for an additional 8 million litres of diesel to Sabah’s normal July quota of 74 million litres by the Domestic Trade, Cooperative, and Consumerism Ministry (MDTCC) Sabah office.

First and foremost, the diesel shortage is chronic and crippling may factories and interrupting the daily lives of many Sabahans and may even have jeopardized the lives of some.

Making a request for 8 million additional litres is not acceptable given that the chronic shortage has caused long queues at petrol stations throughout Sabah for days and inconvenienced motorists being turned away at other stations that have run out of diesel.  The additional diesel quota if approved does not resolve the problem long term.

Even before the shortage occurred, the MDTCC should have stand-by and sent additional supplies and not allow any shortage to occur let alone allow the situation to get out of hand.
Untold damages has been done to Sabah’s economy with factories stopping production which would have resulted in lower production and higher unit production costs as well as other opportunities costs and loss of opportunities.

The diesel shortage is not a one-off affair but a frequent occurrence.  The Federal government need to find long term solution to avert the shortage problem from recurring again in Sabah.

The Sabah government should also be pro-active and take its own initiative to ensure that there are orderly and prompt deliveries of diesel and other petroleum products in Sabah and that there will be no disruptions that disrupt the economy and cause hardship for the people in Sabah.

It is the least the Sabah government should do not only as a responsible, people-caring government but because Sabah is an oil-producing nation within Malaysia, and things should not be left to the Federal or Malaya government alone.

The Government’s own excuse of diesel smuggling just exposes the weaknesses of the inefficiency and shortcomings of ESSZONE and ESSCOM.  Theoretically, there should be no smuggling if the ESSZONE patrolling is effective.  If diesel can escape detection, one fears for the safety of Sabahans when it comes to illegals coming and going into Sabah.

If the diesel shortage is due to additional demand arising from increased productivity and production, it should have been projected and adequate supplies provided to cover for the additional demand as the shortages are not new but a frequent occurrence.

Now, the diesel shortage has shown another side of the inefficiency and mismanagement of the oil resources for the consumers in Sabah or a lackadaisical attitude of the Federal government towards the people of Sabah.