A Covenant Dishonoured: Fulfil The Intentions Of Our Founding Fathers 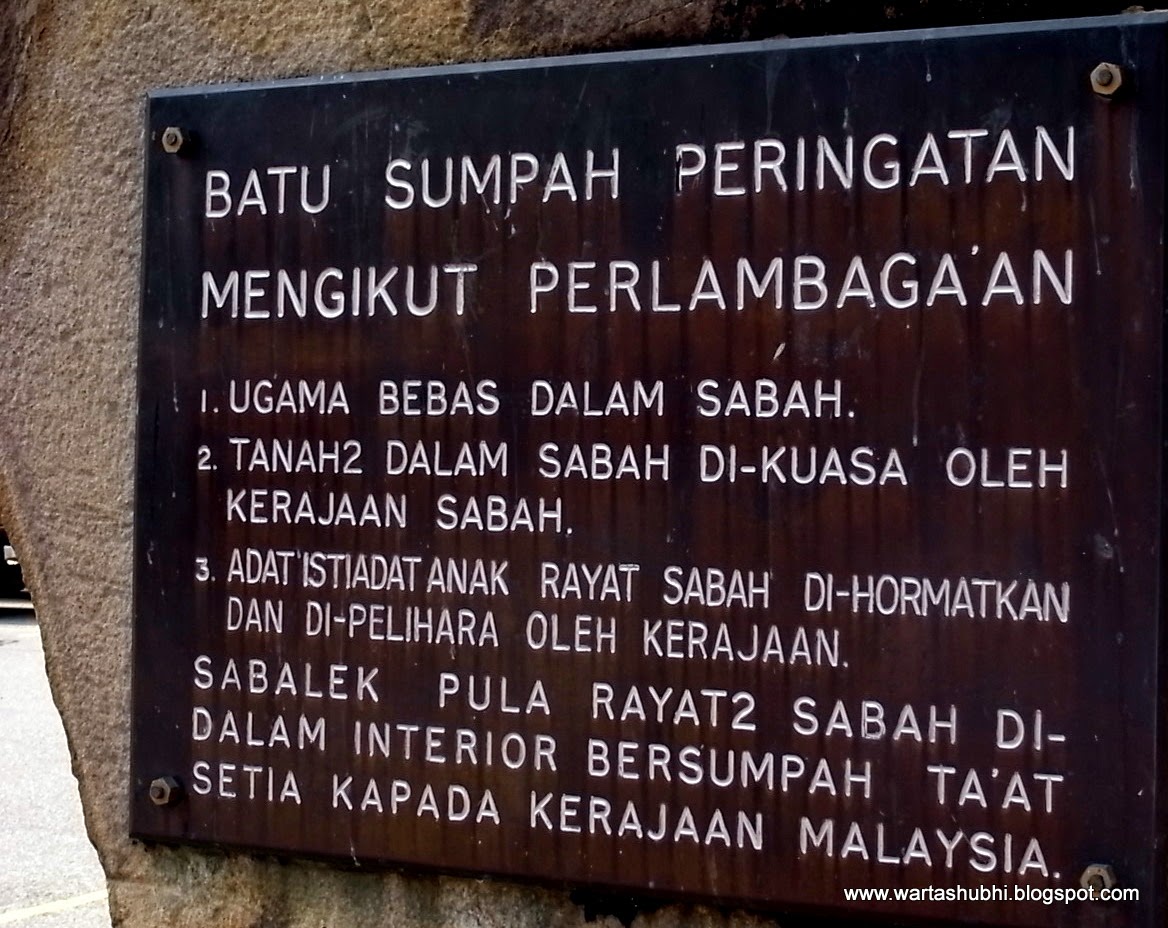 KENINGAU OATH STONE....freedom of religion shall be respected by the Malaysian Government

We, a group of concerned Malaysian citizens in Sabah, would like to express our deep concerns on the government’s response to the violations of religious freedom occurring in the context of misguided and extreme actions undertaken in the implementation of what is claimed to be policies for the inculcation of Islamic values. We speak against the violation of our fundamental right and freedom of religion that has been promised and guaranteed to the people of Sabah.

On 16th September 1963, Malaya, Singapore, Sarawak and Sabah covenanted to unite together to form the Federation of Malaysia, each component state being an equal partner in the Federation (Singapore was expelled from the Federation on 9th August 1965). Sabah and Sarawak agreed to this unity strictly on a 20-point and 18-point conditions respectively.

Out of all these conditions, the first was the assurance that Sabahans and Sarawakians will continue to enjoy their freedom of religion. While Islam will continue to remain the religion of the new Federation this does not make the enlarged nation any less a secular polity.

For Sabahans, the covenant for the preservation of this freedom was of such great significance that it was carved in the Oath Stone located in Keningau and officiated by the Federal Minister of Labour, V. Manickavasagam on 31st August 1964, witnessed by state officials, political and community leaders and members of the public.

This guarantee is found in our present Article 11 of the Federal Constitution. It calls for freedom to profess, practise, propagate and manage our respective faiths, including establishing and maintaining institutions for religious and charitable purposes, without interference and intervention by the State.

After more than 5 decades of the formation of Malaysia, it is sad that today racial and religious polarization in this country have reached an alarming level. The proliferation of oppressive laws that violate our fundamental civil liberties continues unabated. Upsetting judicial decisions, unclear government policies and aggressiveness of certain parties in promoting restrictions to our freedom of religion have caused uneasiness to Sabahans.

In Sabah and particularly in the interiors, aggressive Islamisation activities are being carried out by both covert and overt means to convert especially natives through intimidation, deception, or inducement particularly targeting remote and poor villagers. Conversion ceremonies are being carried out under the guise of providing ‘financial assistance’ to poor natives and native school children especially those living in government hostels.

The National Registration Department, despite its denials, is also labeling native Christians with ‘bin’ or ‘binti’ in their names, as Muslims in their MyKad without their knowledge or consent. We are not against conversions out of free will but we condemn conversion activities done through deceit, intimidation and bribery.

The drive to increase the Muslim population of Sabah by the granting of MyKads to illegal Muslim immigrants has been a long standing bone of contention of genuine Sabahans against both the State and Federal Governments. We Sabahans know that at the heart of it all is an exercise to suppress the voice of the majority genuine non-Muslim Sabahans, and to degenerate our native population and our freedom of religion.

Government departments and religious bodies have been asserting authority beyond their powers for far too long and such unlawful and oppressive practices simply must cease immediately. Extreme and misguided actions in the name of Islamisation and religious intolerance is nothing but a threat to our national peace and stability.

After more than 51 years of being one nation, we consider that this nation has regressed far from its intended destiny. We genuine and patriotic Sabahans want the restoration of the original national vision and intention of our founding fathers of building a rainbow nation of Malaysia. She is multi-cultural and multi-religious. The colours in a rainbow signify diversity and each and every colour in Malaysia has an equal part to play in the development and growth of this nation.

In our pursuit of building this nation, there must be mutual tolerance and respect for one another’s background and beliefs. Ideologies promoted by political parties and especially their leaders must be based on fairness, tolerance and respect for others. Politicisation of a particular religion for narrow partisan gains simply has no place in this pluralistic society of Malaysia.

We are compelled by our loyalty to the nation and our sense of responsibility for the people of Sabah and our future generations to assert these concerns in this letter. In this way we can together confront the challenges which erode national unity and pose a risk to our national integrity. We, like many other concerned Malaysians, call upon the Prime Minister, Chief Minister of Sabah, and both Federal and State Ministers, to take on the full mantle of leadership and to take steps to restore the aspirations and intentions of our founding fathers in 1963.