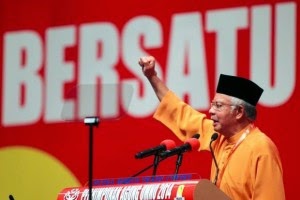 Inciting the people to topple the government through demonstrations is still an offence under the amended Sedition Act, said Prime Minister Datuk Seri Najib Tun Razak.

“So, this is what we want to practice in the country under a healthy and responsible democratic system. Because as the Prime Minister, my responsibility is to maintain peace and security in our country,” he said in a TV3 Special Edition Question and Answer Program With The Prime Minister tonight. The interview was conducted by Hamdan Ahmir.

On Tuesday, Home Minister Datuk Seri Dr Ahmad Zahid Hamidi tabled the Sedition (Amendment) Bill 2015 for second reading at the Dewan Rakyat.
The amendment was in line with the aspiration of the government to be more open and as such, enable the public to be free to give feedback or criticism against the government so that a transparent and responsible administration could be created.

The Prime Minister said although the prohibition to criticise the government had been abolished under the amendment, this did not mean that provisions in the act that defined the sedition offence had been taken out too.
He said that in a multi-racial and multi-religious country, there must be laws to check and prevent statements, news and writings that could be described as inciting and creating hatred among the people.

“In the past, for example, we could charge anyone who criticised the government because there were provisions for this in the existing Sedition Act. We are amending the Sedition Act where we abolished (this provision). They (the opposition) can criticise the government,” he said.

He also denied that the act would be used to trap leaders and members of the opposition parties who criticised the government.

On the contrary, Najib explained that the act aimed to prevent acts by any group who exploited sensitive issues relating to religion and the race which incited and created hatred among the people.

“Eventually there will be racial riots, (riots) between the various religions and so on. Who will suffer then? It is the people who will suffer. The nation is destroyed. So, this is what we want to avoid,” he added. (Brenda)
Posted by sabahkini.net at 13:36