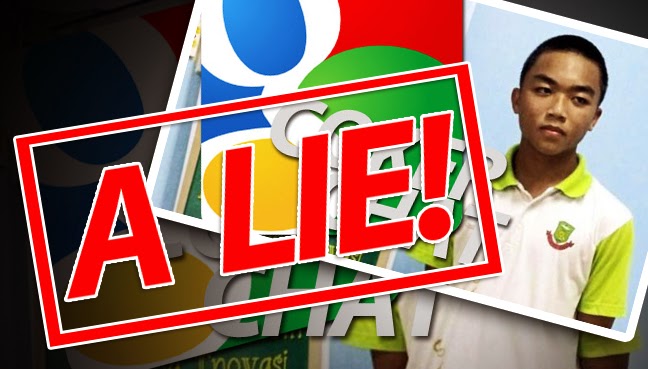 A 15-year-old is being investigated for falsely claiming that he won USD50,000 in prize money from Google for an app he created

KOTA KINABALU: It has come to light that a boy claiming to have won USD50,000 from Google Ideas for a translation app he created, was telling a lie.

His alleged “achievement” received coverage on news portal The Star Online and subsequently on FMT this morning, the article of which has since been removed following an official complaint from Google Malaysia stating the contents of the piece as factually wrong.

It has now been revealed that Yusrim Karim did not win any such prize although he did tell his teachers at SMK Merpati in Sandakan that he did.

Reeling from this revelation, the Sabah Education Department director Jame Alip has ordered an immediate investigation into how Yusrim could have fooled so many.

“I have asked the Sandakan District Education Office to give a report about this,” he was quoted by The Star Online as saying.

Confirming that Yusrim did not win any such prize money, Google Malaysia’s Communications and Public Affairs Department Head, Zeffri Yusof said, “It appears to be an unfortunate misunderstanding.”

He however was willing to entertain the idea that Yusrim might have attempted an April’s Fools prank, and if this was found to be true, he said Google Malaysia was willing to go easy on him.

“If indeed this was April foolery, Google Malaysia would be happy to play along with it.

“Let’s make this all a bit light-hearted instead,” Zeffri said.

Yusrim told the media that he had developed Coker Chat, an instantaneous translation app that allowed the user to communicate with anyone in the world using his own language.

He said the app was the fourteenth he had submitted to Google Ideas, a think tank of Google’s that organised the competition. He also said he was offered by them to either work on a USD36 million project or accept cash as his prize, for which he opted for the cash.

Zeffri however said Yusrim’s story was completely false as no such competition was ever organised. (Free Malaysia Today)
Posted by sabahkini.net at 12:57