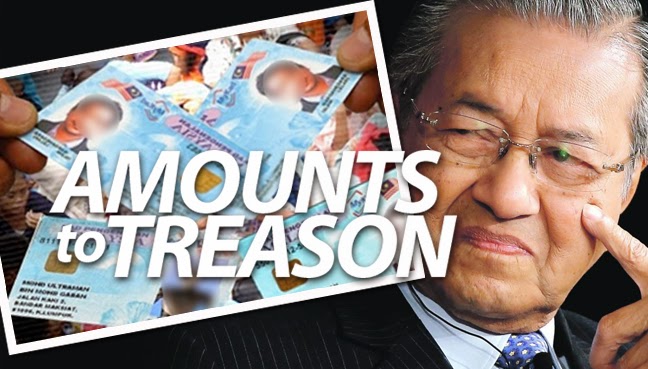 Mahathir Mohamad might not live to see the end result of Projek IC but Sabahans would have to live with the consequences of his actions.

KOTA KINABALU: Sabahans across the political divide disagree with a statement over the weekend by former Prime Minister Mahathir Mohamad that Projek IC in Sabah was “justified”.

They recall that he told the Royal Commission of Inquiry (RCI) hearing in Kota Kinabalu, not so long ago, that he had never heard of Projek IC or Projek IC Mahathir. “This is the first time I have heard about it,” he told the RCI. “Sometimes, people make use of my name.”

Under Projek IC, thousands of illegal immigrants were allegedly issued ICs and MyKads and were entered in electoral rolls without citizenship certificates. If staying in Sabah for a long time was justification enough for issuing ICs and MyKads to illegal immigrants, activist Chong Eng Leong for one wanted to know why applicants used statutory declarations to swear that they were born in Sabah.
“Mahathir is trying to hoodwink Sabahans,” said Chong.

“Late birth registrations, if genuine, have to be endorsed by the Magistrate’s Court under the law. In this case, it was not done because the illegals wouldn’t qualify.”

Referring to the Statistics Department Year Book 2010, he said that the Orang Asal population in Sabah increased 201 per cent by 2010 compared with that in 1970, Bajau by 422 per cent and Malay by 2,068 per cent. “The issuance of ICs and MyKads to illegal immigrants was stepped up when the Parti Bersatu Sabah (PBS) left the Barisan Nasional (BN) in 1990.”

PBS Deputy President Maximus Johnity Ongkili expressed disappointment that loyalty to Malaysia was measured by how long the illegal immigrants had stayed in the country. “Mahathir should take a good look at himself before accusing Prime Minister Najib Abdul Razak of all sorts of things,” said Maximus. “By his own admission, he has ignored the Federal Constitution and the laws by giving ICs and MyKads to illegal immigrants without citizenship.”

“PBS has been proven right on Mahathir. Such an act amounts to treason.”

Maximus recalled that PBS had called upon Mahathir, more than 20 years ago, to step down after it became clear that Projek IC existed. “He ignored our call.”

Tamparuli Assemblyman Wilfred Mojilip Bumburing, chipping in, said the admission by Mahathir can never be justified and Sabahans would never accept the issuance of ICs and MyKads to illegal immigrants. “No country in the world has ever done a Projek IC,” said Bumburing. “Sabah agreed to Federation with Malaysia on the basis that it would have security.”

“Then, we were threatened during the Lahad Datu intrusion by Suluks from the southern Philippines who all carried ICs and MyKads.”

He noted that the RCI Report had stated that in all probability Projek IC existed but could not rule on its existence or otherwise. “Mahathir might not live to see the end result of Projek IC but Sabahans would have to live with the consequences of his actions.”

Luyang Assemblyman Hiew King Cheu said that peninsular Malaysians in Sabah, ironically, have to stamp their passports every year. “Many have been here for 30 or 40 years and are still not recognised as permanent residents,” said Hiew.

“Sarawakians in Sabah suffer the same fate as peninsular Malaysians although they don’t have to stamp their passports. They have the right of residence but without permanent residence status, they have to apply for work permits every year.”

He hopes that the Working Committee on the RCI Report, headed by Huguan Siou Joseph Pairin Kitingan, would find solutions for longstanding residence and citizenship issues in Sabah. (Free Malaysia Today)
Posted by sabahkini.net at 13:50