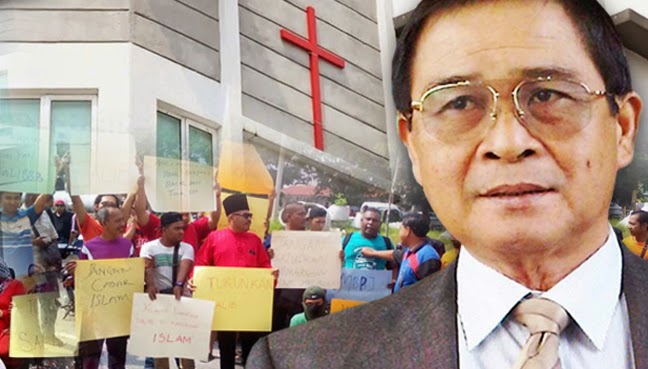 Assemblyman doubts that the government in Putrajaya can protect the people.

KOTA KINABALU: Tamparuli Assemblyman Wilfred Mojilip Bumburing, who left the Barisan Nasional (BN) over the illegal immigrant issue, sees shades of the mayhem in Iraq and Syria in an incident on Sunday when 50 protesters forced the Church in Taman Medan, Petaling Jaya, to bring down its cross. “The government has no business preaching to the world on moderation. Malaysia no longer has a moderate image.”

The people, cautioned Bumburing, have genuine concerns on whether the government in Putrajaya can protect the people although there was no violence in Taman Medan. “It’s most regrettable that the protesters chose to target the Church when the Sunday service was going on. We condemn the protesters.”

“The Taman Medan incident highlights the fact that minorities no longer have a place in Malaysia,” said Bumburing in a statement which threw cold water on Prime Minister Najib Abdul Razak’s pleas for moderation. “Even so, the people in Sabah and Sarawak will never accept the bigotry displayed in Taman Medan.”

“There’s no place for anyone importing the bigotry that goes on in the peninsula.”

Bumburing was widely quoted in local papers and the social media including Whatsapp groups.

He was also expressing surprise that Inspector General of Police Khalid Abu Bakar had contradicted Home Minister Ahmad Zahid Hamidi’s statement that the Taman Medan protesters had committed sedition and would face the full force of the law.

“This shows that the Sedition Act can be interpreted anyway one chooses, depending on convenience,” said Bumburing. “It shows no cohesion in government.”

The Taman Medan incident, he charged, is evidence that the government is allowing such things to happen. “This is a clear attack on the Federal Constitution which enshrines freedom of worship.”

He added that it was beyond comprehension how a cross, the symbol of Christianity, and in a mixed neighbourhood, could be misconstrued as a challenge to Islam. “In Sabah, there are mosques in 99 per cent Christian areas.”

“Sabahans hear the azan daily and don’t feel threatened in any way. Christians and Muslims join each other at places of worship for weddings and funerals.” (Free Malaysia Today)
Posted by sabahkini.net at 01:58