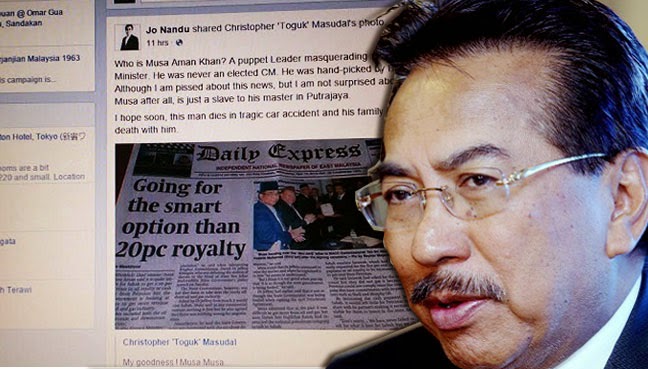 Jo Nandu says Sabah Umno Youth leaders did not understand his posting in English on oil royalty and Sabah CM.

KOTA KINABALU: Facebook user Jo Nandu, who has reportedly elicited public wrath after he allegedly “insulted and humiliated” Sabah Chief Minister Musa Aman in the social media on the 20 per cent oil royalty issue, blames the “storm in a teacup” on Sabah Umno Youth leaders not being proficient enough in the English language.

“The copy of my posting’s screenshot is public and everybody can read the contents and the nature of the comments that I have made,” said Nandu in a statement. “It’s very crystal clear that what I wrote has no hidden agenda.”

“The grounds for the police report made against me are incorrect since I did not threaten the Chief Minister (with) any bodily harm, present or future. Nor are there any words which imply that I have planned and prepared for any attempt or will do any grievous bodily harm against him.”

He was expressing his apologies, “as a professional, for the misunderstanding” which he blamed on “the bad mastery of English by these Umno Youth leaders which had caused this grievance of mine to become blown up out of proportion”.

“I believe passionate Sabahans share my opinion that ‘Sabah should get a higher percentage from the oil royalty’ and my automatic emotional response to the said headline (in the newspaper) is that ‘being the trustee of Sabah’s natural wealth worth billions of ringgit, our Chief Minister seems to be unable to protect it properly from Malaya’s hungry capitalists such as Petronas,” said Nandu.

“Clearly, I was responding with frustration over the shared link that bears the headline (Going for the smart option than 20PC royalty) dated Wednesday, April 14, 2015.”

He reiterated that “in his personal and humble opinion” his posting was misinterpreted, mistranslated and misunderstood, “probably due to the poor command of English language on the part of Sabah Umno Youth leaders themselves”.

“I do wish they (the Umno Youth leaders) will be showing similar anger and efficiency towards the illegal immigrants who are taking over the local economy, peace and security in Sabah,” said Nandu.

While he believes in strong, clean and proper governance which “ultimately will be decided via the General Election”, he assured that he would never want to create unrest or even instigate anyone to do any bodily harm against government officials or politicians especially those who are on the opposing side.

“My posting is not more than a curse (anger) which any husband and wife or siblings would say to each other when they are in a heated argument,” said Nandu.

“I did so in line with my belief that everyone is being endowed with the right to speech and to criticise the government.”

“Thus, how could a mere curse (anger) (which is the only ‘weapon’ available to anyone who is in a helpless situation against someone who is far more dominant or superior) be then tantamount to a threat?”(Free Malaysia Today)
Posted by sabahkini.net at 22:28