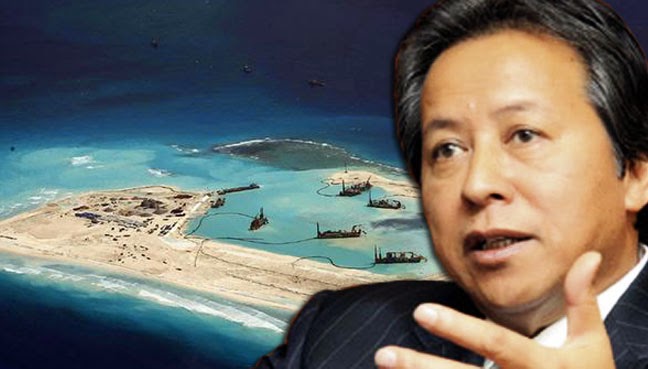 Beijing is widely believed to be dragging its feet on setting any rules that could impede its freedom of action in a sea it considers its own territory.

KUALA LUMPUR: Malaysia has called for China to cooperate with Southeast Asia in speeding up talks on a set of rules in the disputed South China Sea, where Beijing’s island-building activities have sparked international alarm.

Foreign Minister Anifah Aman, whose country hosts a regional summit next week, also cautioned rival claimants to the strategic seaway against taking actions that stoke tensions, according to an interview published Thursday in The Star.

He said Malaysia planned to use its position as chair of the Association of Southeast Asian Nations (ASEAN) this year to push for progress on a maritime Code of Conduct (CoC) aimed at preventing provocative actions.

“Malaysia hopes China will work together with ASEAN member-states in hastening the conclusion of negotiations on the CoC,” Anifah told the newspaper.

ASEAN has pushed China for more than a decade to agree on a legally binding code of conduct, which would build on a non-binding 2002 pledge by parties to respect freedom of navigation, resolve disputes through negotiation, and exercise “self-restraint”.

But Beijing is widely believed to be dragging its feet on setting any rules that could impede its freedom of action in a sea it considers its own territory.

China has faced a storm of criticism following the emergence this month of satellite photos showing large-scale dredging and land-reclamation works on once-tiny reefs it controls, but whose sovereignty is contested.

The South China Sea, a vital avenue for world trade, has long been viewed as a potential flashpoint for conflict.

Vietnam, the Philippines, Malaysia, Brunei and Taiwan also have overlapping claims.
But China asserts sovereignty over nearly all of the sea and has prompted deep concern among its neighbours by aggressively building up its presence.

The land-reclamation works raise the spectre of a more permanent Chinese military and maritime presence in the heart of the South China Sea, from which it can project its growing might.

In an interview with AFP last week, Philippine President Benigno Aquino said China’s activities “should engender fear for the rest of the world,” and could threaten freedom of navigation.

Washington and the Group of 7 (G7) industrialised countries have also voiced concern.

China has hit back, saying the islands are its “indisputable” territory.
The Philippines has said it intends to raise the issue during the ASEAN summit in Malaysia on Monday.

ASEAN has a history of treading carefully with China on the issue, due to Beijing’s immense trade and diplomatic leverage over individual members, and because not all 10 member-states have maritime claims.

In his interview with the tabloid Anifah called for “meaningful and tangible progress” on the issue, adding the rival claimants must avoid “activities that can raise suspicions and escalate tension,” while not directly accusing Beijing of such moves. - AFP
Posted by sabahkini.net at 13:58