Where is SESB revenue of RM1.427 billion? 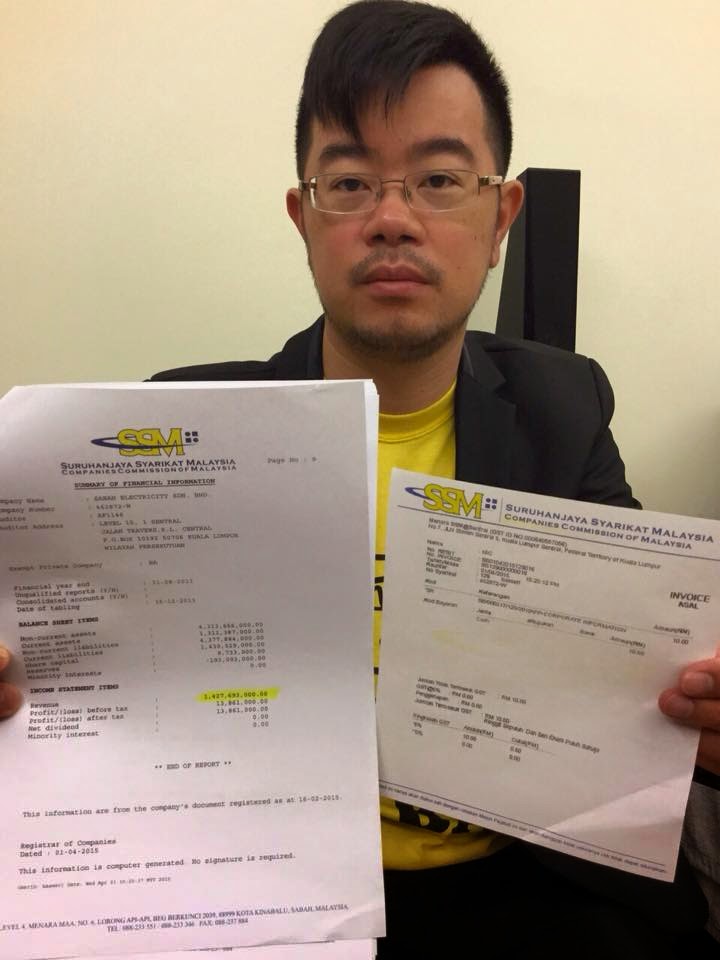 ADUN LIKAS Junz Wong once again demanded SESB to come clean with its account and explain where has the RM1,427,693,000 revenue gone.

"This was the money collected from consumers in Sabah including the capital contribution from developers. We want to know where is the collected revenue of RM1.427 billion? How was it spent until it's left with only less than 1% profit?" Junz demanded an answer.

SESB always gave excuses that they were unable get enough capital to finance infrastructure development for electricity connections and that this utility business could hardly earn profits.

"With such enormous revenue collected, SESB could still claim that they needed capital contribution and higher electricity tariff to sustain this monopolized utility business?

How many corporations in Sabah could earn such high revenues? I don't believe there is other company in Sabah, which can earn so much cash income. Furthermore it's allowed to earn lucratively under protected monopolized business environment." Junz said

Junz who is also DAP Sabah Organizing Secretary believed that SESB could be earning similar good revenues every year and once again demanded SESB to come clean by revealing its account publicly to prove that the revenue collected was spent prudently and the high electricity tariffs charge was indeed a fair charge.

"SESB should immediately reveal its account publicly or upgrade herself to a BERHAD so that it could no longer hide behind a Sdn Bhd and that everyone could scrutinize the spendings of SESB.

There is nothing wrong to demand this because SESB being the monopolized utility provider has the social responsibility to ensure that Sabahans are not overcharged." Junz explained

Junz claimed that the people of Sabah may already start to wonder whether SESB was really running at a loss for the last few previous years and the reasons behind those losses, just like the MAS issue.

National Union of Flight Attendants president Ismail Nasaruddin wanted Khazanah Nasional to reveal to the people about the RM6 billion allocated to save MAS.

It's alleged that MAS new CEO is being paid RM19.8 million. It's alleged that MAS’ financial problems were caused by MAS’ top management being paid high salaries and bonuses, as well as leakages. There are still so many questions that are unanswered and if this continues, we will not see a better future for MAS. It will suffer a worse position.

"I can see so many similarities between the two. Due to SESB unwillingness to respond, they can't blame people of suspecting that there could be financial mismanagement.

Why SESB dare not respond if there is nothing to hide? Is it because SESB is also paying super high salary to SESB top management ?! It is because SESB is worried that it might not secure the funding or grant of RM2.3 billion for the next 5 years?"

Junz told SESB to stop treating the people of Sabah and the Sabah Government as fools and answer the questions.

"If SESB is not able to run a monopolized business with such huge revenue of RM1,427,693,000, it only proves that SESB is incompetent.

Sabah Government should seriously call on TNB to return the 80% shares to Sabah State Government and run the utility business on its own. Or maybe let Sabah interested companies to take over with Sabah government as the gatekeeper." Junz concluded
Posted by sabahkini.net at 14:00