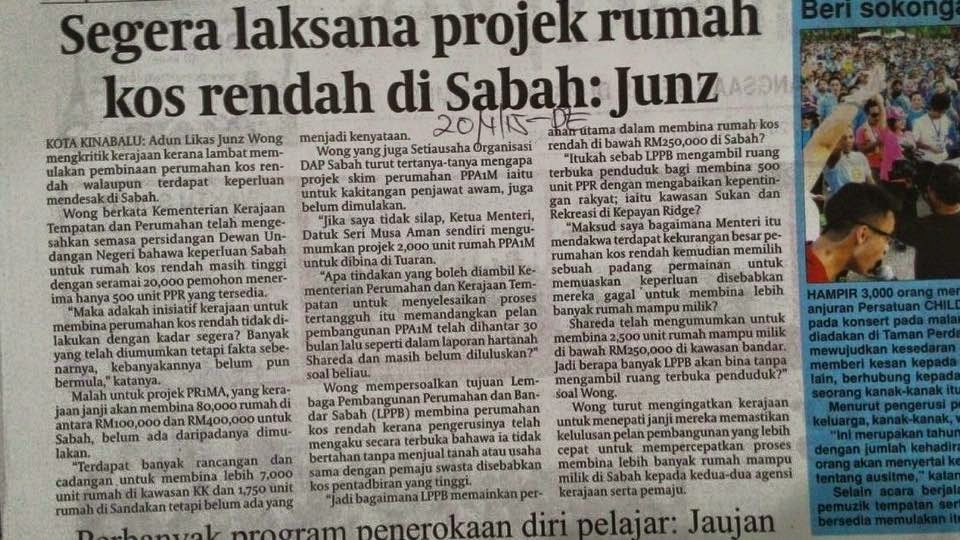 "Then why has the govt initiatives to build low cost housing not proceeded with sense of urgency? Many have been announced but in actual fact, most have not even taken off yet." Junz asked.

He took PRIMA for instance;

However according to Local Housing Minister himself admitted at last state sitting that PRIMA scheme has not taken off to build even one unit of affordable house in Sabah.

Junz who is DAP Sabah Organizing Secretary also wondered why PPA1M housing scheme project has also not taken off yet.

"If I have not mistaken, Chief Minister Datuk Musa Aman himself has announced the project of 2000 units perumahan PPA1M (perumahan penjawat awam) to be built in Tuaran priority to civil servants." Junz said

"What action would be taken to resolve the procrastination process of MLGH given that the development plan of PPA1M has been submitted 30 months ago as per Shareda property report and still not approved yet?" Junz prompted

PPA1M project has taken more than 30 months now and still has not passed the development approval stage yet.

Junz said he would not be surprised if the same Tuaran PPA1M project for civil servants is included in the BN manifesto for PRU14.

"Other government agencies such as LPPB SPNB and even JPN have not impressed at all.
They have failed their duties to build more low costs housing priced at RM50,000 and above in Sabah." Junz said

Junz questioned the purpose of LPPB to build low cost housing as LPPB chairman has openly admitted that LPPB could not survive without selling lands or joint venture with private developers due to high administrative costs.

"So how is LPPB going to play the leading role of building low cost houses below RM250,000 in Sabah?

Is that why LPPB has to take away people's open space to build 500 PPR units in expense of the people's interests; that is the Sport & Recreation areas in Kepayan ridge?

I mean HOW can the Minister claim there is such huge shortfall of low cost housing then pick a playing field in an up market neighborhood to satisfy need because they have failed to build more affordable houses?

SHAREDA has announced to build 2500 units of affordable homes below RM250,000 in KK areas. So how many is LPPB going to build without taking away people's open space ???" Junz asked

Junz reminded government to keep their promises to ensure faster development plans approvals to expedite the processing of building more affordable houses in Sabah both to government agencies as well as developers.

Once again Junz urged the Ministries to ensure the relevant authorities submit the draft local plans without further delay to TYT for gazetting the plans, citing that is urgently required to avoid submission of development to Central Board for double handling development plan approval and creating further red tapes in delaying DP approvals.

"If only those government initiatives could kick off efficiently to build thousand of low cost or affordable houses in KK areas as promised, there is absolutely NO reason for government to even CONSIDER taking away the open space from the people of Kepayan ridge." Junz concluded
Posted by sabahkini.net at 02:03