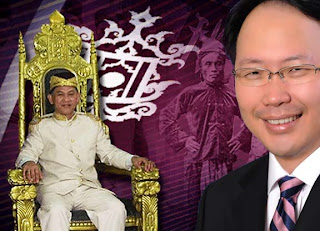 NOW that the Police have completed investigation and handed over to the Federal Attorney General (AG) the case in relation to the proclaimation by Datu Mohd Akjan Datu Ali Muhammad as the ‘Sultan of Sulu’ at Kampung Likas on 2 Feb this year, as far as the possible legal action is concerned, the ball is with the Federal AG Chambers.

Akjan's declaration as the ‘Sultan of Sulu’ is an unequivocal act of treason which challenges the sovereignty of Malaysia as a State. It also defies the position of the Yang Dipertua Negeri as the Head of our state.

As the Phillipines is still lingering with its futile claim over Sabah, if this high-handed treachery is not handled with utmost care to reflect the firm stand of the Malaysia Government, it may carry implications that our sovereignty over Sabah is compromised.

Akjan's claim that he was born in Kampung Limau-Limauan, Kudat as reported by the press, is doubtful. Kampung Limau-Limauan ia a seaside village where everyone knows everyone. I happened to be there for a programme last Saturday. When I asked the Ketua Kampung who is above 70 years old, he brushed off the story without any hesitation.

Therefore, whether for reason of undermining the sovereignty of the Malaysia or forged or dual citizenship, an appropriate charge must be framed against Akjan so that the matter can be adjudicated in Courts.

If he is found to have unlawfully acquired the Malaysian citizenship, then the issue of revocation of his 'citizenship' will not arise because he has no valid citizenship to be revoked. Whatever the case may be, I urge the Home Ministry to also take stern actions as the national security is at stake.