ANOTHER DELAY FOR QEH2 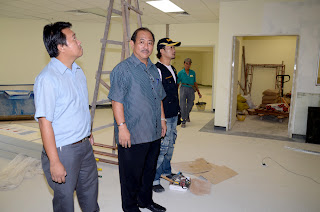 VISIT….Chong accompanied by SAPP Youth (at Chong's right is Jeffrey George and at his left is Chester Pang) visit on going project.

Asserting this was SAPP Information Chief Chong Pit Fah following the expiry of its final extension due date on May 23.

He reminded that in February this year, Liow came to Sabah for the umpteen times to give excuses for another delay in completing the RM72.6 million renovation works on the former Sabah Medical Centre (SMC) building.

February was supposed to be the month of the revised completion date that Liow had given after reportedly issuing a stern warning to the contractor concerned on Aug 11, 2010, which at that time was 13 days late.

Hence, in a follow-up, Chong urged Liow to keep his words because ever since the SMC building was purchased for conversion into a General Hospital, he had already made three different announcements over the completion date.

The contract work for QEH2 included the construction of a five-storey parking lot, elevators, refurbishment of the accident and emergency department, development of cardiology and cardiothoracic centre as well as expanding minor operation theatres at the nine-storey building.

Chong said SAPP noted that many excuses were given by Liow that he attributed to the delay such as weather condition among others.

But, Chong contended that constructing a hospital and in this case doing renovation works on it should be different from any other ordinary building like shopping complex.

“The government should treat the case as an emergency to ensure no hiccups of the works schedule no matter rain or shine,” he said while illustrating a case during the natural disaster in Sze Chuan, China, where its government managed to complete a temporary hospital with all the medical facilities within just a few days. 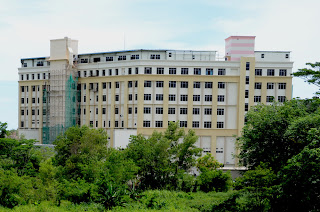 “Our country will be in trouble in the event of such calamity because just doing renovation works take the government years to complete like in the QEH2 case,” he reiterated.

“Now, what more excuses does he have over the delay completion, for the third time?” he asked.

Citing that Malaysia is now aiming for a high-income and developed nation status, Chong said such a blatant show of incapability on the part of a Minister could not be tolerated. Hence, resigning was the only way to redeem the public’s loss of confidence on the government of the day.

“In Japan, though not necessarily now, a person who had publicly ridiculed himself by making false promises even commit hara-kiri (suicide),” he quipped.

Towards this end, Chong said SAPP would be holding a peaceful demonstration at its headquarters in Bornion to remind the government the number of days Sabahans in the State Capital were left without a proper general hospital if the renovation works still continued on May 20 at QEH2.

At the same time, SAPP would also be calling for Liow to step down besides apologizing to the people of Sabah, over the fiasco.

“If he refused to step down then the people of Sabah will know what to do in the coming General Election,” he said.

During his last visit to inspect at the Queen Elizabeth Hospital I it was reported that Liow would not be entertaining any more request for an extension to the completion date.

“The work was supposed to have been completed by February.

“However, only about half of the 455 beds in the hospital could be used at the moment due to the delay,” he said.

He said then that work completed included the construction of a four-storey car park with 328 bays while construction was still ongoing for two wards on the seventh floor of the building.

Liow said all additional equipment for the hospital, which had been delivered, could not be installed due to the delay.

“The contractor should not treat the extension given as leisure time,” he was quoted as saying.