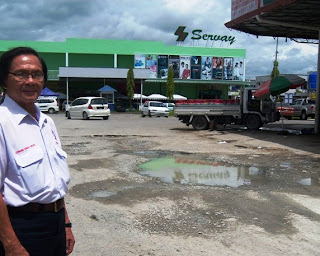 THE road condition and the other infrastructure facilities in the Penampang New Township is much needed the attention of the Penampang District Council. This is following the complaints and request received by the Sabah DAP Member of Parliament office in Kota Kinabalu.

He said the potholes and broken road surface areas are in need of urgent patch up and sealing. The motorists and the shop owners here are not happy about the bad road and dirty environment here. There are complaints concerning the broken down street lights in this new township which caused the area becoming very dark at night.

The Kota Kinabalu Member of Parliament Hiew King Cheu had personally contacted the District Officer William Sampil to ask him on how and when the district council can come to patch up the potholes and redo the road surface.

The DO confirmed with Sabah DAP that he will get the contractor to first fill up the pot holes on the road and later he will seek funds to redo the road by paving a new layer of asphalt. He said the contractor will start work immediately.

Basing on that, Edward advices the developer to hand over the street lights to the council earliest possible, but of course all of the lights must be in working order and acceptable by the council.

The Penampang District council has many other roads under their area which needed the fullest attention. Edward asks the council and its contractor to survey regularly and attends to the many complaints on bad roads.

A government contract had been awarded to the council road maintenance contractor, therefore he should fulfill his job requirement and responsibility before the public filed a complaint. We pay the money and you do your work!