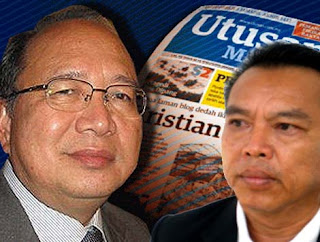 SINCE the last two years alone we have seen how the freedom of speech and religion have been severely curtailed in Malaysia. And of late the debate and altercations in religious matters have escalated to an extreme proportions, no thanks to extremist statements by several firerand leader and to the inaction by the authorities.

Up to now the Christian leaders in the Barisan Nasional have been very tolerant, speaking out quite loudly when necessary but not sufficient to bring the whole matter to a critical level.

But to recap, what we have gone through include

(1) The silly instruction to remove crucifixes from churches when a Muslim dignitary comes to visit “because the Christian symbols are offensive to Muslims” (so why not remove the whole church building as well, and why come at all?),

(3) Arguments about the acceptability of Malay Bibles which have been in use in Sabah and Sarawak long before the creation of Malaysia,

(4) Unauthorised confiscations of Bibles and Christian book at airports,

(5) the banning of movies, including innocent cartoon movies like The Prince of Egypt (which by the way is about Moses, the prophet for Judaism, Christianity and Islam),

(6) The defacing of Malay Bibles with serial numbers and conditions of their use (“…for use by Christians only” – so what if some Buddhists, Hindus, Taoists, and pagans are interested to read and study the Bible?),

(7) The quarrel about the use of the name “Allah” in which the Christians won the court case, but was appealed and is now deliberately stalled in the court to deny justice to Christians),

(8) The double standard on the use of the name “Allah” (permitted in Sabah and Sarawak but forbidden in the Peninsular, so a person carrying the Malay Bible on a flight to Kuala Lumpur will suddenly become a criminal the moment the aircraft enters the peninsular air space – should he or she be forced to throw the Alkitab out of the aircraft window before landing?),

(9) Datuk Ibrahim Ali said there is no such thing as a Malay Christian, and he may be right if he is talking about Malaysia, but there are 300 million Malayo Polynesians in the Malay archipelago, in Polynesia and Micronesia and they belong to many religions, including Christianity (e.g. in Indonesia), and Hinduism (in Bali),

(10) We have been subjects to incessant bullying and threats, the extreme case being Ibrahim Ali swearing to be willing to be bathed in blood in a jihad against Christians),

(11) We have been trapped into a nonsensical accusation of trying to install a Christian Prime Minister, no thanks to the dishonest and conspiratorial actions of two bloggers and the Utusan Malaysia which sensationalized the rumor into a supposedly legitimate news),

(12) We have been highly discriminated as Christians in the civil service, especially in the armed forces and in teaching profession, because Malaysia wants these two sectors to be overwhelmingly dominated by Malays, and now they want to send 80,000 teachers to Sabah and Sarawak, so say goodbye to Borneonisation!),

(13) The Herald, a Christian newspaper has been under threats of having its publishing permit suspended for using “Allah” and publishing news which are deemed anti-Islam.

On the overall, what we have witnessed is a case of serious bullying, intimidation, insult and moral degradation as Christians. The word tolerance and mutual respect no longer exist in the minds of many politicians and NGO leaders.

The pleadings of Christian leaders for understanding and offer of dialogues between the faiths for the sake of interracial and interreligious harmonies have been totally ignored. Because of this, the Christian leaders in BN have been pushed to the corners and they have been fighting back quite bravely.

Tan Sri Bernard Dompok, for example has been championing Christian rights, by saying that the Bahasa Malaysia belongs to all Malaysians, including Christian Malaysians and they have the right to use it in worship.

He had also said there is nothing wrong with having a Christian Prime Minister, because after all the religion of the Prime Minister has never been made a condition in the Malaysian Constitution.

The fight for Christians by other leaders in the recent controversy with confiscation of Bibles and conditions for their release was admirable and deserve our accolades.

But still the problem continues. There has been some quiet for a while but it might be the discomforting quiet before another storm. The campaign to formant hatred and to stoke anger against Christians have tested our patience and no noticeable intervention has been forthcoming from the Prime Minister, which is very, very disappointing.

We know this is because of the Umno’s dilemma; they worry that by seeming to support Christians, BN will lose a lot more Malay votes. We can bet this is not the end of it. There will be more attacks later, especially after the next general elections, if the BN comes back to power.

Because it is already a problem which has already become endemic, the BN Christian leaders must now think very hard about their positions in BN, and where they are headed for as leaders.

Obviously, their role as members of the BN elite group, and their opportunities to speak at the highest level in the land have been insufficient. They have been ignored and treated as negligible.

As such they must reevaluate their stances in the BN, and to stand back some distance and to see the BN situation as an outsider, and understand as clearly as possible what is really going on, what is really rotten in Malaysia.

That way, they will be able to see the truth to help them make the ultimate decision whether or not to continue in BN or not. Keep in mind that the Christian issue is not just religious but also cultural, historical and spiritual, by which all aspects of our lives are involved for our ultimate destinies.

Ask, how long can BN go on the way things are going in Malaysia now? Why not join forces under a new umbrella to create change and to get us to go back to what the Constitution originally intended for us?

They need to remind themselves that as Christians we are guaranteed protection by several provisions in the national Constitution, as follows: Article 3 (1): Islam is the religion of the Federation; but other religions may be practiced in peace and harmony in any part of the Federation.

Article 8 declares that “all persons are equal before the law and entitled to equal protection of the law,” but states that this article “does not prohibit . . . any provision or practice restricting office or employment connected with the affairs of any religion, or of an institution managed by a group professing any religion, to persons professing that religion.”

Article ll (1): Every person has the right to profess and practice his religion, and subject to Clause (4), to propagate it. But too bad, these provisions seem to have become meaningless for Malaysian Christians!