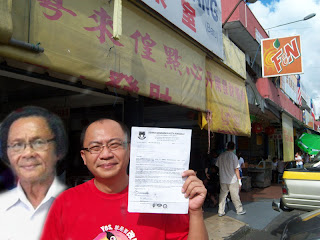 THE Sabah DAP thanks the Mayor of Kota Kinabalu on giving an explanation and clarification on the issue of the sun shed used by shop owners in the KK City.

That had in fact caused much worry and anger amongst the people. He stressed that the notices issued to the particular shop owners is clear that the action of the DBKK is entirely aiming on the shop front sun shed. The wording used in the notice is threatening enough for the owner to have some sleepless nights.

Edward said it will be adviceable for the DBKK to look into the possibility in improving the content of the notice and to be more specific and direct. It is also for public interest and for easy understanding that the notices are to be written in three languages like Chinese, English and Bahasa Malaysia. This will help to eliminate further misunderstanding in the future.

On the issue that the DAP misled the public, Edward retaliated that the job of DAP is to bring up the various unjust issue and to the attention of the authorities and government. There is no such thing like creating a political mileage, we just do our job and we serve the best we can.

At the moment our job is to expose the wrong doing of the government along with its authorities concerned. We are the voice of the people and we will continue to do that. Our stand is always behind the people to provide them with a strong voice to stage their grievances and to express their anger.

The sun shed issue we have done exactly that and we have successfully got the DBKK to act and address the issue. Please retrieve all misleading notices issue on the sun shed with immediate effect.