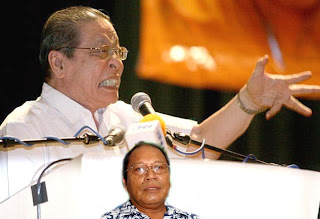 SABAH Progressive Party (SAPP) Vice President Dullie Marie today is deeply disappointed at the turn of events while attending the dinner in conjunction with Harvest festival organized by DAP on 22nd May at Putera Grand Ballroom, Bukit Padang.

“It suppose to be an occasion to celebrate the real meaning of Harvest Festival as it originally intended; to celebrate on the spirit of cordial relationship among the people of Sabah but unfortunately it turned out to be political talks dominated by DAP leaders from Semenanjung and of course some PR leaders in Sabah,” he said.

Dullie, who is also SAPP Putatan CLC Chairman said that Lim Kit Siang, the advisor of DAP made a blatant speech by telling Sabahans that only PR will be able to bring changes to Sabah.

“He blindly ignored the existence of local party/parties without any respect … not even a bit.

“Lim Kit Siang’s speech did not reflect on the meaning of cooperation with local party like SAPP. He even demanded SAPP to be in PR, which can be ended like SNAP in Sarawak. He might have also forgotten that PR was unregistered.

“It seems he simply ignored and not sensitive to the wishes of PR leaders in Sabah who perhaps know better the real situation. The formation of negotiation committee set up by SAPP was prompted due to the request made by DAP and PKR leaders in Sabah and Semenanjung respectively.

“It looks like PR leaders especially from Semenanjung want to kill SAPP even before negotiations take place.

“This is a reflection of divide and rule and for us to survive we have to be subservient to them on terms and rules they set. On this basis any negotiation to reach mutual understanding will be rough and tough.

“Lim Kit Siang is very arrogant and insensitive in his speech. He managed to camouflage the audience who are mainly of the Chinese community. By sensationalizing on issues Lim forget to ask himself on actual number of Chinese seats in Sabah; he felt so great he is not bothered to know on seats held by Bumiputras, Muslims and non Muslims.

“The promised of making Sabah into a prosperous State within 100 days is nothing new. The same slogan we have had heard when UMNO began to spread its wings into Sabah in the 1990s. But what had happened since then. Hence, he forgot to address the experience of Sabahans had from being ‘colonized’ for the last 48 years. He also quoted the speech made by Tan Sri Simon Sipaun on 7th March 2011. By putting him in the limelight he (Lim) hopes to psychologically able to hoodwink the KDM community.

“I think he displayed such arrogant attitude due to its party success in Sarawak. Being a veteran politician he should have good answers on what happened on Chinese voting trend in Sarawak. Lim should also open his eyes on the voting trends on the natives of Sarawak. Why they still rallied and gave their votes to BN despite on various exposures made by the opposition. The Sarawakians want to protect their own autonomy.

“Therefore, for PR to achieve it dreams to Putrajaya, he should stop this arrogance; stop the ego of being a more superior to us here in Sabah. He has to remember this is a 21st century. We agreed on change and will cooperate or form a pact but will not join PR at this particular instance of time. SAPP would like to make total change based on the Malaysian Agreement 1963 on the basis of 20 Points and that Sabah is a partner in the formation of the Malaysian Nation.

“Lim should remember without Sabah and Sarawak there won’t be a Malaysia today. I just like to remain Lim Kit Siang and other leaders from Semenanjung, they should be more sensitive on what they say. We are all loyal Malaysians and that we have grown with time. We believed the change must be made by Sabahans itself. Sabahans should be given the wisdoms on the real meaning of Independence. PR leaders should refrain from imposing colonist mentality on to the Sabahans.