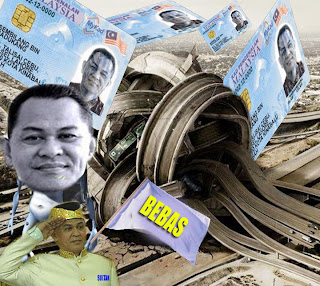 POLICE are awaiting a decision from the Senior Federal Counsel (SFC) on what should be done next regarding businessman Datuk Mohd Akjan Datuk Ali Muhammad, who allegedly declared himself the Sultan of Sulu in early February.

"They have taken down 31 statements from several individuals, including Akjan himself, and the findings have been submitted to SFC.

"We have presented this case (Sultan of Sulu) to the SFC and the SFC just needs some time to review the investigation before any decision is made.

"It is up to the SFC whether or not to charge, if they think there is enough evidence to charge him (Akjan) or any other individuals involved in this case, we will charge them," he said at the high profile policing campaign at the Jesselton Point jetty here on Monday.

Hamza said Akjan, who is Chairman of the Sabah Islamic Welfare and Sermon Organisation of Malaysia, was released after being remanded for seven days under Section 117 of the Criminal Procedure Code.

"He was released unconditionally on May 22 and his passport was not impounded," he said.

When produced in court for his remand hearing on May 16, Akjan asked that his case not be heard in public as it was a unique one which involves the Malaysian Government.

Meanwhile, Hamza said police would continue to focus on five crime-prone areas although there is a decline in the overall statistics.

The five areas, namely, Kota Kinabalu, Sandakan, Tawau, Lahad Datu and Penampang, contribute about 70 per cent of crime in the State.

"Even though crime in Sabah has shown a significant decline of 16 per cent this year, these areas would still contribute to an increase if police start to take things easy," he said.

The decrease in crime, he added, is a huge achievement for the police and was made possible due to continuous hard work and commitment in combating crimes together with the public's cooperation.

"The public has also played an important role and I thank and urge them to continue giving their full cooperation to the police," he said later at a blood donation campaign in conjunction with the 204th Police Day celebration at the Suria Sabah shopping mall and high profile policing at the Jesselton Point jetty.

Hamza said the achievement was in line with the Government's target in reducing crimes in the country under the National Key Result Areas (NKRA).

"From January this year till yesterday (Monday), about 44.8 per cent of crimes have been solved by the police while street crimes were reduced to about 40 per cent.

"It is a remarkable achievement showed by Sabah police and I hope such performance will continue in the future.