SAPP READY TO NEGOTIATE WITH PAKATAN. 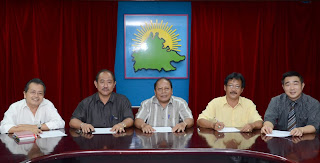 SAPP has formed a committee headed by Vice President Dullie Marie to hold such discussion with Pakatan’s three panel members from DAP.

Pakatan’s de facto leader Datuk Seri Anwar Ibrahim has predicted that the ruling Barisan Nasional might dissolve the Parliament and call for an election as early as July this year.

Such a negotiation is important to enable the opposition front to face the BN for the coming election on one to one basis.

Once the negotiation is done, both SAPP and Pakatan would be able to organise their election machineries to work on the respective ground more effectively.

Dullie said the negotiation is vital and must be materialized as soon as possible so that the opposition could prepare well and to avoid last minute maneuvering.

He said an understanding by both parties would give the opposition a good chance to topple the ruling the BN.