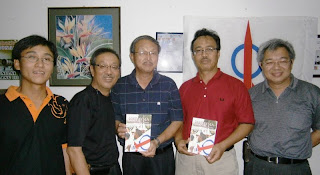 FOUR councilors from the Kajang Municipal Council paid a visit to the Kota Kinabalu Member of Parliament in his service centre yesterday to learn more about the work of the MP office in KK.

On welcoming the four councilors from Kajang (Majlis Perbandaran Kajang) namely Steven Chan Jeong Hon (DAP Cheras), Mohamed Yusoff Bin Bachek (PKR), Lee Learn Eng (PKR), and Ong Seng Peng (PKR), KK MP Hiew expressed that it is good that there is an interact between various PR parties in terms of exchange of experiences, know how and fore-view of the management of the city and towns.

There are so much to learn in order to bring about a well managed town and a city. The transfer of experiences and knowledge will be valuable in many ways.

The visitors also interested in the good of the Sabah DAP on bring various issues affecting the people in Sabah and the requested Hiew to enlighten them on the tactic in handling and solving cases involving public complaints, especially dealing with the government agencies.

They said since now they themselves are in the government of Selangor, and they do face similar complaint and issue. Sometimes these issues can be difficult to solve due to the fault of the previous BN government running the Municipal Council. They had been working hard to put the matters right.

They hope to see that the Sabah PR can topple BN in Sabah and form the next Sabah State Government. Hiew told them that the PR team is working side by side to ensure the goal is achieved, and of course this depends largely on the will of the people in Sabah to bring about a change. Hiew stressed that it is possible to change if all adopt the formula and that is “Change We Can, Starting from You and Me”!