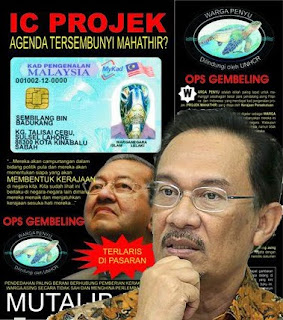 FORMER Prime Minister, Tun Dr Mahathir Mohamad, 86, has so far escaped too much public scrutiny on his controversial 22 years in power. There’s a perfectly logical reason for this. His politics of distraction, especially via his pet poodles like Perkasa, Pembela and Utusan Malaysia, has kept the pot forever on the boil, and the people engaged in polemics or debating the non-issues continue to hog the public space.

One ‘gem’ from Mahathir in recent days is that perhaps people will only believe him on Opposition Leader Anwar Ibrahim “if they see him (Anwar) doing it”. Mahathir loves and thrives on being hated and vilified all around.

Clearly, ‘doing it’ is a crude reference to Anwar’s allegedly deviant sex life which appears to have pre-occupied the self-confessed prudish Mahathir so much since 1998 when he ruthlessly sacked his former deputy prime minister and heir apparent and had him incarcerated in order to get his hands on public funds to save his cronies from bankruptcy.

One’s sex life, according to the ‘Victorian morals’ of Mahathir who left behind a legacy of embedded corruption and political murders, should suffice as the sole yardstick on being morally fit or otherwise in the eyes of the public.

The ruling Umno and Barisan Nasional (BN) must eschew the politics of distraction and sacrifice Mahathir without any hesitation whatsoever if they want to truly redeem themselves in the eyes of the people and thereby at least drag out their last days in power.

The choice is for them to make. It’s between being consigned to the dustbins of history in the short term – for the cardinal sin of “pledging” to swim or sink with Mahathir – and slowing down the process of their increasing irrelevance by distancing themselves from him, clearly the undisputed arch villain of Malaysian politics.

Now, a golden opportunity of sorts has presented itself with Anwar’s disclosure over the weekend that he had heard that Mahathir, and former home minister Megat Junid Megat Ayob, were involved in a covert operation in Sabah to issue citizenships to illegal immigrants in exchange for their votes. This calls for any number of police reports against Mahathir, the home minister, the secretary-general of the home ministry, the director-general of the National Registration Department and the head of the Election Commission (EC).

Illegal immigrants having MyKads is an open secret in Sabah. Most of them are twice-born, that is, once in their home countries and the second time in Sabah – and only possible in this state – as evident from their local birth certificates based on statutory declarations.

The case of Pakistani carpet-trader Salman Majid, 49, which went to court in Kuala Lumpur is a case in point. He was released from custody and escaped a deportation order in late 2009 after former Sabah chief minister Harris Salleh testified on his behalf and declared that he had always been a loyal voter for the BN in Sabah. The court then promptly declared him a ‘Malaysian’.

Still, Umno has so far resisted calls by Sabahans for a Royal Commission of Inquiry (RCI) on the issuance of MyKads to illegal immigrants in the state. A RCI will settle the question, once and for all, of whether Mahathir and Megat Junid indeed committed treason in Sabah as alleged and therefore should go down in history as traitors.

But what is new is that the latest disclosure on the “federal government-promoted MyKad scams” in Sabah came from Anwar himself. The de facto PKR leader had previously avoided the subject altogether just like Mahathir who makes no mention of it at all in his recently released self-serving voluminous memoirs. No doubt, he wants to carry the secret with him to the grave.

Anwar has had no choice but to come forward this time amidst fears that the BN is engaged in a Sabah-type ‘citizenship for votes’ operation in the four Pakatan Rakyat-ruled states, borderline Perak and other states like Negri Sembilan, Malacca and Terengganu which are all in ‘grave and imminent danger’ of falling to the opposition alliance. This must explain why Prime Minister Najib Tun Razak thundered recently that ‘Putrajaya must be defended at all costs’ and that the BN must win the coming general election by hook or by crook. His earlier approach for ‘winning’ elections was “I want to make a deal. You (the voter) do something for me – vote for me – and I will do something (give money) for you”.

Anwar was kept completely out from the operation in Sabah, according to the man himself. He was denying that he was involved in the heinous acts in Sabah as Umno Deputy President.

Anwar claimed that he had very little power even as the number two and heir apparent before he became a fallen angel in 1988 in the wake of the mid-1987 Asian financial crisis when Umno leaders turned on each other bitterly amidst the spectre of their various ‘business’ ventures risking bankruptcy.

There has always been more than a little suspicion in Sabah about Anwar, especially on the issuance of MyKads to illegal immigrants and their placement on the electoral rolls. It’s unlikely that washing his hands on the matter and pointing in the direction of Mahathir and Megat Junid will persuade Sabahans to give Anwar the benefit of the doubt. He was not merely an onlooker in the corridors of power but was in the inner circle itself and cannot get away by trotting out a tame ‘I heard’ line on Sabah.

Anwar needs to be more forthcoming and tell all that he knows on Mahathir’s attempts to marginalise and disenfranchise the Sabahans, especially the Dusuns, in their own country. This would save his political alliance from being victims of his karma in Sabah.

Putrajaya’s continuing attempts to steal Sabah from its people and hand it over to any number of illegal immigrants from the Philippines, Indonesia, Bangladesh and Pakistan is no doubt without any parallel in world history. There’s always a first time. Of Sabah’s 3.2 million population in 2005, only 1.5 million are locals while the rest, foreigners, are mostly illegal immigrants.

If Anwar doesn’t want to open up on Sabah, fearing that he would be implicated as well, he should keep away from the state as he was once advised by former PKR Vice-President Jeffrey Kitingan.

The Sabahan man for all seasons was expressing his disappointment that while Mahathir took Anwar out of Umno, no one has ever been able to take the Umno – read ketuanan Melayu (Malay supremacy) – out of him. Anwar continues to swear by the vile, racist ketuanan Melayu mindset while paying lip service to ketuanan rakyat (people power) or Hindraf’s Makkal Sakthi.

It may be unthinkable for now but it has happened elsewhere in the world. Consider Augusto Pinochet in Chile and Hosni Mubarak in Egypt, among others. No one, in their time, could be as powerful as these two men. Yet, they ultimately bit the dust and were eventually brought to trial at home for various crimes against their people.

Likewise, Mahathir’s turn to count the bars will come and soon if the people in Sabah, for one, diligently pursue him to account for various acts of transgression and abuse of power in the state during his long innings in power in Putrajaya. Mahathir must not only be locked up, the keys must be thrown away in his case.

Mahathir cannot and must not be allowed to get away scot-free. Others need to be deterred from acting similarly with impunity while in public office. It will be poetic justice indeed if Sabahans chalk up a historical first by proving that Mahathir committed treason in the state and should therefore be rightly labelled a traitor. It’s unfortunate that Megat Junid died so young as dead men tell no tales.