DAP TRY TO PUT ALL EGG IN ONE BASKET? 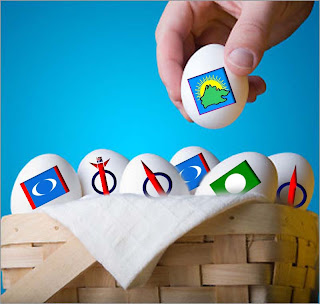 SAPP President, Datuk Yong Teck Lee said he was surprised by the harsh way that DAP supremo Lim Kit Siang had attacked SAPP as being unrealistic, besides issuing the ultimatum that SAPP must join Pakatan Rakyat (PR) on the ground that only PR can beat BN.

He expressed this in an immediate reaction to Lim’s speech delivered at the Sabah DAP Harvest Festival do held in Putera Ballroom in Bukit Padang, on Friday, in which Yong and several SAPP leaders were present.

Yong said he did not expect to be issued a public ultimatum by Kit Siang in a harsh manner that put him and his colleagues in an embarrassing situation and their party ridiculed in public.

“Lim caught all of us by surprise by his harsh tone, the abrasive way in pinpointing me by name and ridiculing SAPP. My immediate feeling was that, after their super victories in the April Sarawak state elections, Lim Kit Siang’s DAP has already become super confident of taking over Putrajaya and the Sabah state government at the coming general elections” said Yong.

He quipped if it was because Lim now feels that DAP does not need anybody else, as Pakatan alone can beat BN, then why demand that SAPP joins Pakatan?

He also explained that SAPP had decided to attend the said function in good faith to lend moral support to DAP/PR.

“As a matter of fact, Sabah DAP chief, Jimmy Wong Sze Phin, had called and sms to invite me to the DAP harvest festival. In order to reciprocate, I invited Jimmy Wong as a guest to my house and we had a nice chat on politics.

Yong then recalled that at the DAP rally on September 16, 2008 at Kian Kok School in Kota Kinabalu, Lim had called for a Pakatan-plus coalition with SAPP.

“This means that SAPP need not be a member of the fledgling Pakatan. Yong also spoke at that ‘916’ DAP rally the day before SAPP left the Barisan Nasional government. Has Lim now unilaterally dropped his own Pakatan-plus formula?” he asked.

However, Yong said he still remain hopeful that SAPP’s relationship with PKR, DAP and PAS can improve further before the general elections.

“I only hope that the super confidence of DAP leaders will subside in the coming months and realize that their promise of 416 (April 16) change of Sarawak government has failed miserably because ‘416 change’ has turned into a ‘416 Taib Victory,’ he said.

Yong reiterated that SAPP wishes to work with Pakatan to bring about a change of government and not a ‘two parties system’ with a Chinese opposition on one side and Bumiputra government on the other, like in Sarawak now.

“SAPP’s struggle first and foremost is for autonomy for Sabah. We reject political control over Sabah in the hands of the political elite in KL. If Sabahans leave politics entirely to BN and PR, then the ‘two party system’ becomes ‘two parties, one system’. We believe that the ‘one country, two systems’ concept is more applicable to Malaysia,” he asserted.