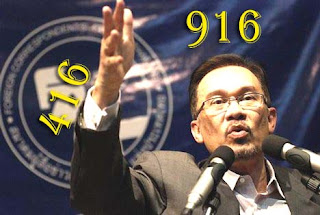 Anwar was entertaining an online news portal’s TV network earlier this week on his monumental failures in Sarawak, as in Sabah earlier. Like his equally naïve interviewers, he didn’t seem to know whether he was coming or going on Sarawak.

Anwar’s take was that the Malays in Sarawak were put off by the idea of a Dayak Chief Minister and refused to award even one seat to the party.

He claimed that the minority Malays, only 20 per cent of Sarawak, accused him of promoting the idea of a Dayak chief minister at their expense. Anwar, it appears, tried to unsuccessfully reason with them that the Dayaks were in a majority in Sarawak and therefore the chief minister should come from that community.

For those unfamiliar, Sarawak Chief Minister Abdul Taib Mahmud is a Melanau and therefore a Dayak. The difference is that unlike the great majority of Dayaks who are Christian if not pagan, Taib is a Muslim.

However, he has a Christian paternal grandfather and as many Christian relatives as Muslim ones. He also avoided talking about Islam like the plague since he knew that the Dayaks were watching him like a hawk.

Taib even blasted the recent seizure of bibles in Malay print in Kuching as ‘stupid’. It was enough to secure the release of the bibles. Interestingly, no Sarawak Malay has ever been chief minister of the state.

All four Chief Ministers so far have been Dayak, Taib and his predecessor and maternal uncle Abdul Rahman Yakub being Muslim, and the first two being Christians i.e.

The Ibans, the biggest community in Sarawak, failed as chief ministers, because of opposition from the other Dayak communities i.e. Bidayuh, Orang Ulu and Melanau.

The Sarawak Malays are in no position to object to a chief minister on the grounds that he’s Dayak or a non-Muslim.

To digress a little, the Sarawak Malays are in fact Bidayuh living on the coasts of the Kuching division and Ibans along the coast of the other division who converted to Islam.

The Brooke dynasty referred to them as Malays after the fashion of the colonial British who used it as an umbrella term to describe various ethnic groups in Peninsular Malaysia.

Also, it’s unlikely that the Dayaks will ever support the idea of a Sarawak Malay being chief minister of the state. If one is thrust on them, he won’t last in the tumultuous politics of Dayak country.

It’s more likely that a Sarawak chief minister would continue to come from among the non-Iban Dayaks – the creed is not in question – and this would ensure political stability in the state. If a Sarawak Malay wants to be chief minister he should not deny his Dayak heritage.

PKR’s emphasis on a Dayak CM, in any case, led to allegation among the Sarawak Malays that such a candidate would turn the state into a Christian one, according to Anwar.

The de facto PKR chief is like a ‘bull in a China shop’ raising a preposterous non-issue. He naively treads, like all Peninsular Malaysians, where even devils and angels dare not.

In Sabah, Anwar thundered that there was no way he would have Jeffrey Kitingan as the Sabah PKR Chief. Jeffrey, who has many Musli relatives, was accused openly by Anwar of being a racist and harbouring a hidden Christian agenda, whatever that means.

Anwar was playing politics where he should not be doing so.

Jeffrey pushed for the idea that the Sabah PKR chief should be democratically elected by the division chiefs and not appointed by the party headquarters (read Anwar) in Kuala Lumpur.

Anwar would have none of it and wanted a Muslim to head Sabah PKR although the majority of the members were non-Muslim Dusun, including Kadazan (urban Dusun), and Murut.

Anwar’s excuse is that the Muslims, no doubt the illegal immigrants with MyKads included, were now in a slight majority in Sabah. Baru Bian seen as stooge for Anwar

He decided unilaterally that the Sabah Chief Minister should be Muslim.

He does not seem to realise that the local Muslims in Sabah were not a homogenous community and were further divided into Dusun Muslim – Ranau, Bisaya and Orang Sungei, among others – Bajau, Suluk, Brunei Malay, Irranun, Banjar, and Cocos-Keeling, among others.

In ‘compensation’, Anwar decided also unilaterally that the chief minister of Sarawak would be Dayak and Christian.

He went on to appoint Baru Bian, an Orang Ulu Christian, as Sarawak PKR chief.

No one in Sarawak accepts Baru because he was not elected but thrust on the membership by the party headquarters (read Anwar).

That’s one reason why PKR failed to interest the people of Sarawak on April 16.

Baru was seen as a proxy and stooge for Anwar and Peninsular Malaysians.

Jeffrey’s stand in Sabah, meanwhile, was that if the division chiefs in Sabah elected a Muslim head, so be it.

Anwar did not want to risk elections and deal with the possibility of a non-Muslim head.

Eventually, Jeffrey left amidst accusations that he was the King of Frogs, a label he has explained, and interested only in party posts and positions and in being number one and chief minister.

Jeffrey’s explanations that his politics was all about the people, the issues, principles, policies and priorities, and not posts and positions, were pooh-poohed by Anwar and drowned out by the propaganda barrage from party headquarters.

Sabah Deputy Chief Minister Joseph Pairin Kitingan thinks that Anwar made many promises to Jeffrey, all of which he had no intention of keeping, made use of him to build up the party in Sabah and eventually played him out.

The people in Sabah and Sarawak prefer the chief minister to be elected by democratic means and decided by the respective governors in accordance with the constitutional provisions. Any departure from this would be an exercise in illegality, and ultimately, futility.

The current unease in Sabah over the post of chief ministeris is wholly due to the fact that the candidate is appointed by Putrajaya and not elected by the people in accordance with the state constitution.

Also, Sabahans are no longer willing to tolerate a situation where a candidate stays too long in the post. The idea is that the rotation of the Sabah chief minister’s post should be continued but every five years and not two years as previously and by election. It’s not known whether the proponents want the chief minister’s post to be confined to Umno, an unacceptable idea, or rotated among the Barisan Nasional component parties as until 2003. The local parties want in as well.

Pakatan Rakyat, the opposition alliance, and Anwar would do well to take heed of the thinking on the ground of the people in Sabah and Sarawak on the post of chief minister for their respective states. PKR should allow only elected candidates to head the party’s Sabah and Sarawak chapters.

In that case, Jeffrey would probably be back with PKR in a wink, the party is yet to accept his resignation, but not so much to wrest the post of Sabah chief. Many feel that he should play the role of elder statesman in Sabah and Sarawak for PKR and function as a de facto chief. Jeffrey’s return to PKR may help arrest the party’s declining fortunes in Sabah and Sarawak.