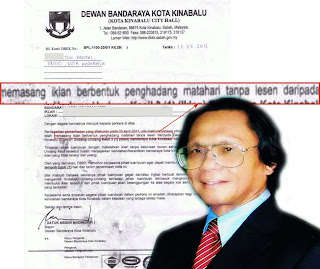 THE removal and advertisement fee imposed on the sun shade in the KK City was totally denied by the DBKK on its notice served to the shop operators, and the said Sabah DAP is misleading the general public.

Later the Mayor announced that there will be no action taken to remove or fine those people who hang the sun sheds in front of their shops, except the advertisement banners (Iklan sepanduk) will be charged accordingly.

The Mayor said DBKK is only referring to the advertisement banners that needed to pay for advertisement fee, and those who do not pay shall have their banners removed by DBKK with a removal charge imposed.

The notices clearly stated in black and white they are referring to sun shade and that is what the officer from DBKK had instructed the shop owners when handing over them the notices. The exact words on the notice were ‘Iklan berbentuk Penghadang Matahari’ that means ‘advertisement sun shade’.

We seek an apology from the DBKK on the ground of accusing us that we misled the general public.

Later Yee commented that it is highly unfair for the DAP to accuse DBKK on something that is not true before making a proper study of the case. He said it is not for the opposition parties to just making false accusation and to mislead the public.

Edwards said the DAP was not wrong in the first place, and we have studied the case carefully before bringing it up on behalf of the people. We regretted the comment made by Yee, and in fact he is just trying to act as if he is doing something for the people in KK. He equally did not read carefully what is written on the notice, and maybe he doesn’t understand Bahasa Malaysia.

Anyhow, we thank the KK City Mayor for stopping the action to be taken on the Sun shades, and we hope that in the future DBKK can be more considerate and careful in handling matters that affects the people.

DBKK should immediately come up with positive plans and ideas to upgrade the sun shade in KK city, if they are serious to bring about a beautiful and new cleaner look of the City. Of course, it will be better still if the sun shade new design can also be uniform and orientated to promote the tourism industries in Sabah. Even better still, the new sun shades can be provided and supplied free of charge to the shop owners!