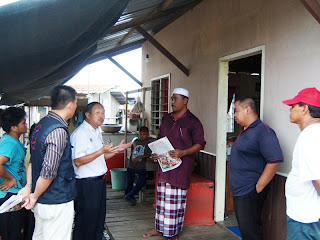 The many hundreds of the kampong dwellers of this Kg. Lupak Meluas had been staying here for many years with the consented written approval of the government and the BN parties. They said it is unfair for them to receive suddenly the notice from the MPS to demolish their houses and move out just because someone wanted to use the land.

They people here were given until 10th June, 2011 to move out which the think it is highly inhuman and encroaching on to their rights. They found the KK MP Hiew who was in Sandakan on a two days visit and brought him to the Kampong for an inspection of the situation.

The kampong folks gathered together and told the MP Hiew their problems and expressed their heart-breaking feeling towards receiving the notice to demolish their dream house and have to seek lodgings and rebuild their houses else way. 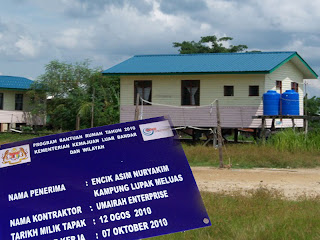 MP Hiew and his Sandakan Batu Sapi Branch Chairman George Hiew Vun Zin went immediately to the Kampong near the sea side of Batu Sapi upon the request, and found out that the people’s problem is truly an unfair case which demonstrated the authorities and the government is not doing the right thing.

The whole demolition of the kampong of its 190 over timber houses is not appropriate and uncalled for. The worst is that there are some 10 units of new PPRT houses spread out in the kampong which were completed only in October 2010 with a cost of RM85,000 each, now also faced possible demolition.

What is the logic behind all this? The other thing is that if the people refuse to move the MPS will impose a fine of RM 500 or RM 100 per day according to the By-law 4(1).

Hiew was told by the people that they felt they had been forced to move out without given enough notice time, proper arrangement, agreement on compensation and even moving expenses.

One lady said she and her family just completed their new house with a cost of RM58,000.00 and now faced demolition, what are they going to do? She said she had received the demolition order and she also claimed that she had the papers and letters to prove that she was given the okay to build there.

The kampong is situated by the sea side and adjacent to a piece of reclaimed land ready to be the new site of some PPRT project according to the kampong folks. These people had been staying there for a long time, and now they are going to be homeless.

They asked what happen to the ‘roof over everyone’ promises made by the BN government. Why can’t the government build them new houses before moving them out? If the new PPRT housing is going to be built next door or in their existing kampong land, then they should be given the first chance.

Hiew urges the MPS and the government to be more careful and considerate in handling the cases like this, especially in dealing with the local Sabahan. The people should be given proper arrangement on the relocation and ample compensation to move. 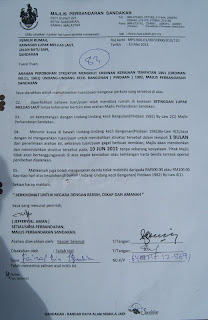 TERRIBLE….. the notice of eviction and demolistion.

It is government land no doubt, but in the past the BN government has consented to these people making use of the land to build their kampong, and even a name of the kampong was given, they should not force them to move out so hastily.

Since this is involving the Federal PPRT housing project and it is a Federal matter, Hiew said he will bring this matter up with the Minister of Federal Housing and Local Government to check on the real situation.