GROUP ALL ROADS UNDER ONE DEPARTMENT 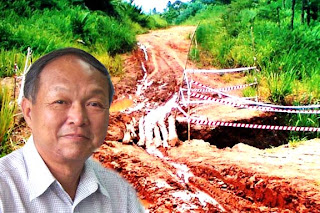 THE Sabah DAP Member of Parliament for Kota Kinabalu Hiew King Cheu calls for the setting up of a single ‘Road Department or Ministry’ to look after and take over the jurisdiction, power, administration, legislative, building and maintenance of all the roads, highway, feeder road, secondary and primary roads, including kampong roads which are in Sabah, irrespective whether these are of state or federal level.

Hiew stressed the importance on the setting up of such a department or ministry is to enable to clear the backlog, confusion, mismanagement, abuses, miscommunication and overlapping of various existing government departments, councils, local authorities, rural development agencies, different ministries, both under the state and federal governmental set up.

These prevailing matters had been in the system for a long time and the mix up continued without being paid much attention and tried to put it right. The Sabah government continues to ignore the fact that the matter had caused much inconvenience and trouble in its role on handling the problems and headache started and involving roads in Sabah.

Usually when we have problem with a bad road, we faced the problem first in identifying which department in Sabah should be the one to approach, to be in charge and responsible of the particular stretch of road.

As far as the many type of roads are concerned, they are divided to Federal trunk roads which are under the direct control on planning, implementation of construction, maintenance and providing financial support by the Federal Ministry of Works. Some roads in Sabah are financed by the federal but not executed by them.

The state roads, either secondary or primary roads are mixed between many ministries and these ministries are building and taking care of the roads differently. The council roads and state roads are the one always being mixed up and sometimes do not know whose power there is.

There are also roads that no one cares because these are not handed over by the developing entities. Some roads are even built without the town planning approval and marking on drawings, which later become a public road by virtual that the road is used by the public for many years.

Hiew suggested that the way to clear all these messy situations is to unify the roads authorities, which can bring along a simply and straight forward administration, concentrated financing, efficient in maintenance and less confusion.

The new set up of the road department with its efficiency, effectiveness and workability on providing us with good roads will be enhanced and improved tremendously. This will also served to cut down the work load of many government departments and even the ministries concerned.

They have no ideas and even lack of initiatives to move and bring about a change in our road work system. When we look into the big losses incurred, the many life lost, the heavy accident casualties, and the expensive damage repair cost to our vehicles caused by the bad roads, it is a big shame on the government in their incapability to provide us with some decent roads to drive on.

This is reflected in the many bad road report in Kudat and in many parts of Sabah. The ‘Taufofa Roads’ is a typical example, along with the huge road pot holes, cracked up road surfaces, collapsed roads, and unattended drainage system every way.

If the BN government is still not doing any thing to improve the situation, and take the advice to streamline the road department, it will be their price to pay during the next general election. ‘Enough is enough’ and the people are looking for a big Change now, “Yes, Change We Can, Starting from You and Me”!